The Caves at Norman Island in the BVI 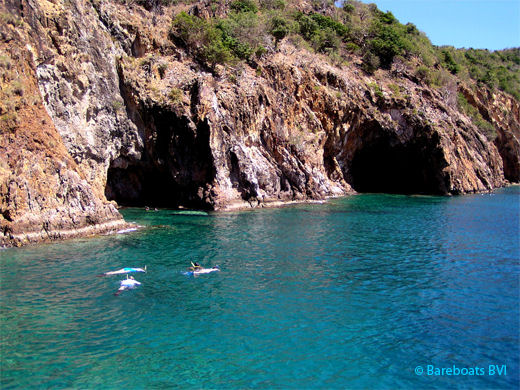 The Caves at Norman Island in the BVI
Located at Treasure Point in Privateer Bay, the world renowned caves are a "must see" for any first time visitors sailing the British Virgin Islands.

It's impossible to describe the exact feelings I had the first time I swam into the caves. Anticipation, exhilaration, and perhaps a smattering of fear would probably come close. I detest closed in or small spaces and loathe darkness, so for me to willingly enter such a place ... took a certain amount of fortitude.

Once inside though and after my eyes adjusted to the darkness, I was fine. The walls of the cave are covered in various life forms and if you bring a dive light along, you can see all the spectacular colours.

Snorkeling just outside the caves is pretty good too. Be sure to keep your eyes pealed, you never know, you may just find a stray piece of 8!

In high season, both the nearby Indians and The Caves are very popular and tend to get overrun by about 10:00 in the morning and continuing until about 4:00 in the afternoon. Try to get here before the crowds arrive.
For some reason, many snorkelers seem to think that feeding the fish is a fun thing to do. I have seen lots of people, particularly at The Caves and The Indians do so. Not good folks! Please don't feed the fish ... and here's why.

There are 4 mooring balls here for National Parks Trust permit holders and there is one private mooring ball owned by Mystique Charters, a day charter catamaran out of Frenchman's Cay. NPT moorings are for daytime use only. There's also a line for dinghies to tie off if staying in The Bight or other anchorages around the Island. 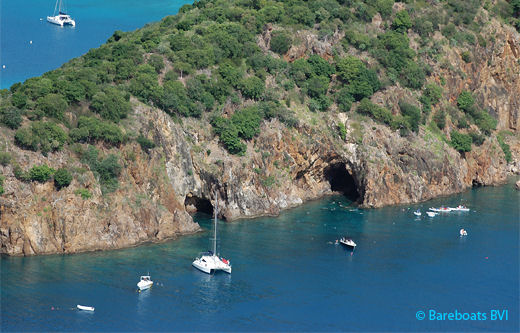 Aerial Shot of The Caves 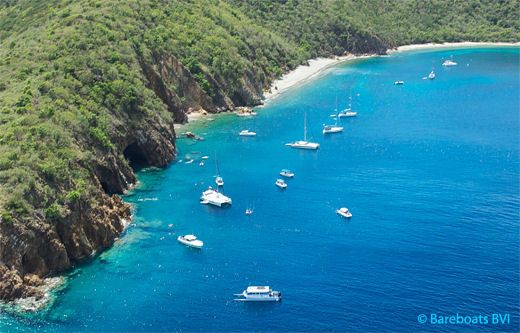 The Caves from a Distance


A Tidbit of History ... more treasure found in the Caves!

Fast forward from 1750 and the story of Treasure Island, to 1894 ... one hundred and forty four years after The Seaflower and Owen Lloyd visited Norman Island, Henry Creque, a hard working fisherman from Anegada, purchased Norman Island from the crown for £40. Legend has it that Mr. Creque found more than a few doubloons in one of the caves.

The fisherman was forced to seek refuge from a storm and took his little fishing boat into one of the caves. The little boat was repeatedly bashed up against the wall of the cave by the waves, dislodging several rocks from the cave wall. The rocks fell into his boat, along with several doubloons.

The story has never been officially verified and I've heard it told a few different ways, but it would seem Mr. Creque's story is a continuation of the tale of buried treasure on Norman Island. It is reported that the family picked up and moved from Anegada to St. Thomas, USVI shortly thereafter, and promptly opened a store in Charlotte Amalie.

As the Creque family had toiled on Anegada for many years and were far from wealthy, their sudden departure from the BVI together with an abrupt change of career, certainly lends credence to the tale. It could also be true that Henry Creque was a wise and frugal man who saved his money so that he might one day realize his dream of becoming a major land owner as well as an important merchant in the "big city". Anything is possible!

The truth is mired in history as no official records of his find exist. If Mr. Creque's story is true, and it seems it probably is, the doubloons were very likely a part of the haul pilfered from the Spanish galleon, "Nuestra Senora de Guadalupe".

Nevertheless, Norman island remained in the Creque family for more than 100 years, until in 1999, Dr. Henry Jarecki and his wife Gloria purchased it from William Creque (of the USVI) for a reported 8 million dollars. The Jarecki's are well known throughout the BVI for their conservation efforts. They also own the very lovely and rather exclusive, Guana Island.