The Indians in the British Virgin Islands 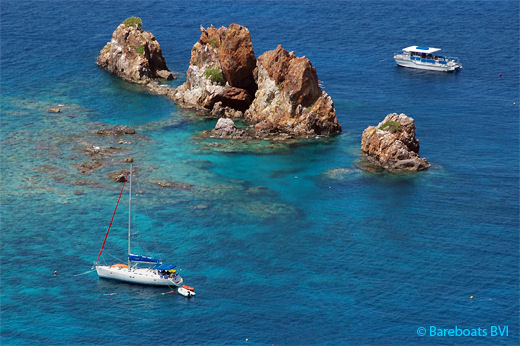 The Indians in the BVI
Probably amongst the top 5 most popular dive and snorkeling sites in the BVI, The Indians are located at latitude 18° 19' 54" N and longitude 64° 37' 46.80 " W, which puts you in the area of the main mooring field. They lie just north of The Bight at Norman Island and about half way between the easternmost tip of St. John, USVI and the westernmost tip of Peter Island.

I always recommend charter guests plan their sailing itinerary to include a stop here at the beginning or end of your holiday. It's the perfect place to begin or end your yacht charter experience.

Four rocky pinnacles rise straight up, about 100' from the ocean floor. Approximately 50' of that is above water. There's good diving to be had on the western side (where the dive boat is seen in the photo above) and the visibility is usually excellent.

The last time I dived here was many years ago. I stopped going because the place is just too busy for my liking. At that time, there were lots of lobsters hiding in the various overhangs and in the multitude of rock crevices.
You'll find both hard and soft corals, colourful sponges and maybe a shark ... if you're lucky. I've never seen a shark here, but friends of mine have. I saw a very large spotted eagle ray here once that quite surprised me. This is not the typical place to see such large rays. There are smaller rays around though.

There are lots of blue tangs, parrotfish, cow fish, damsel fish, sergeant majors, jacks, queen angels, wrasse, trunk fish, and all the usual suspects, including an eel or two. If you're lucky, you might spot a queen trigger fish.

There's an underwater cave that's usually occupied by various reef fish but on this particular day, there were at least 10 lobsters hiding in there. It was mid September and a storm had just passed through two days before, so I guess they were just hanging out in the safety of the cave.

You'll also find a short little tunnel to swim through (with SCUBA gear) which is pretty neat. The kids love going through there. Bring your underwater camera, there are good photo ops here. 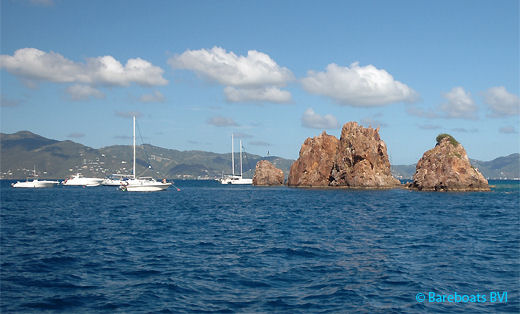 The Indians from the Water 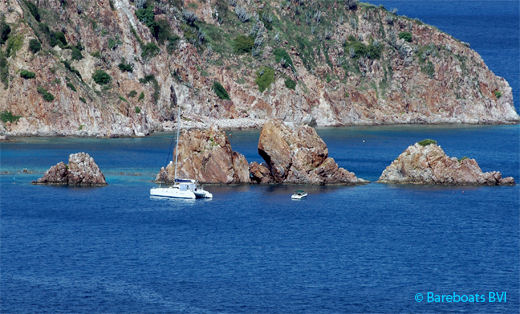 Another Shot of The Indians


On the east side, closest to Pelican Island, there's a nice spot for snorkelers. You'll see some reef fish, but certainly not as many as there were years ago. So many people snorkel here daily, that I suppose the traffic has chased some of the fish away. I imagine the invasion of the dreaded, non-native Pterois Volitans, or "Red Lionfish", may have something to do with the declining numbers of reef fish as well.

There's been visible damage to the reef over the past couple of decades as parts of it are very shallow and it seems far too many people are not aware that touching or standing on coral will kill it. Please try to stay off the coral when snorkeling and please mind your fins. One careless kick can destroy something that took many years to form. 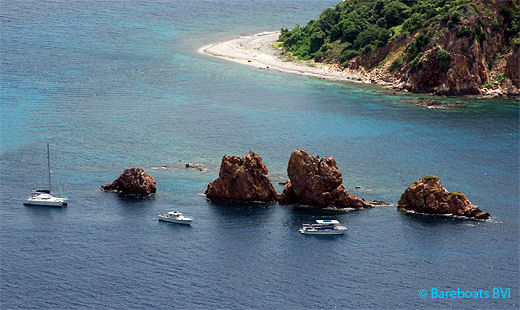 Aerial Shot of The Indians


If you are an early riser, and if your itinerary permits, get here early as the place fills up quickly and remains busy all day long. Trying to get a mooring after about 10:00 in the morning can prove difficult. I'd recommend coming here before breakfast, then high tailing it to your next stop before everyone else arrives. I've never done a night dive here, but I'm guessing it would be a good spot!