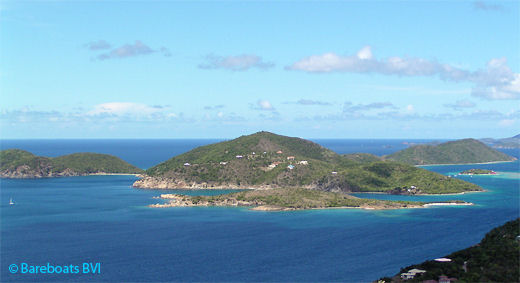 Smaller Inhabited Islands & Cays
There are so many islands and cays in the BVI, it is difficult to know how to distinguish them from one another.

Apart from the 5 main islands, I have separated them according to what (if anything) is established on each island. A few of the islands represented in this section, have nothing but a single restaurant or bar located on them. Others are strictly residential or privately owned while still others are of significant importance in regards to location and commerce.

It should be noted that several (once separate) islands and cays have had their physical identities obscured by land reclamation projects that took place in the last half of the 1900's. Today many are basically indistinguishable from Tortola. However, in most cases, they still maintain their individual names, if not separate island identities.
Bird Cay and Dead Horse Cay completely disappeared when the Wickhams Cay I and II reclamation projects were developed. There always was a Wickhams Cay, but there never was a Wickhams Cay II before the late 1960's.

Bird Cay, which is now part of Wickhams Cay II was for some strange reason completely obliterated and it's name has been all but forgotten. Go figure.