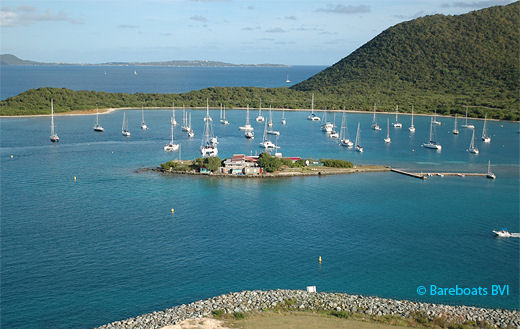 Bellamy Cay in the British Virgin Islands
From 1716 to 1718, at the height of lawlessness in the British Virgin Islands, Black Sam Bellamy (a pirate of note) took a keen interest in Bellamy Cay. Black Sam used this tiny Cay, then known as "Blanco" for his base of operations while crew members used Trellis Bay as a careening hole to maintain their fleet of ships including; the Postillion, Mary Anne and finally, the Whydah ... amongst others.

Sam discovered that from Blanco, as well as from nearby Sprat Point, ships could be seen sailing through the Sir Francis Drake Channel. His favourite prey were Spanish Galleons laden with treasure intended for the exclusive use of the King & Queen of Spain. However, this pirate wasn't particularly selective. He would plunder any ship he fancied and had a particularly good eye and a taste for fast ships.

Unlike many of his contemporaries such as Blackbeard (a deviant and notorious scoundrel), Black Sam had a reasonably kind soul. After taking a ship, he would often set the men free and in one instance even returned a ship to her captain, as he wasn't particularly pleased with her sailing characteristics. For this kindness, Sam earned the title, "The Prince of Pirates".

When I first moved to the BVI in 1993, I recall buying a book written by Jill Tattersall, a very talented author and water colour artist, who emigrated from England in the 60's with (her then husband) Dr. Robin Tattersall.

In her book titled Haunted Great Houses of the Caribbean, I believe I recall her telling a tale about a lady named Mrs. George (a widow) who owned a large portion of land on Beef Island, including the Trellis Bay area. Mrs. George raised cattle and it seems that the pirates frequently chose to steal her cattle.

Not one to be hoodwinked by scoundrels and thieves, Mrs. George kindly offered to throw a party for them at her estate, where she promptly poisoned those who accepted her invitation using some sort of punch concoction to deliver the lethal doses.

She then had their bodies neatly lined up along the beach in Trellis Bay as a warning to others who might dare think about stealing any more of her cattle.

Today, Bellamy Cay and Trellis Bay are home to The Island Last Resort Restaurant and visitors usually buy their meals here, rather than steal them. :)