Great Camanoe Island in the BVI 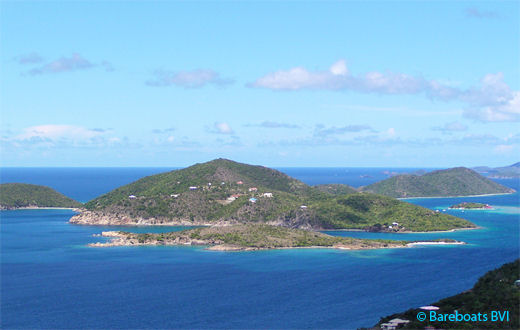 Great Camanoe Island in the BVI
This island is exclusively residential with two distinct communities. Indigo plantation is a small community of privately owned (freehold) homes with their own road system, a small marina in a park like setting, and communal tennis courts. Home owners use golf carts to get around. This community is located on the Little Camanoe side of the island. Privateers Bay community is leasehold and is located on the Scrub Island side.

Both of these communities together occupy approximately one third of the land mass on the island's southern extremity. The remaining two thirds is thus far, undeveloped. There are no commercial ventures, restaurants or other businesses here.

This island boasts a couple of the BVI's loveliest bays. A National Park was established at Cam Bay (photo below) in 1999. This is a marvelous area for swimming and you'll find the beach is a great place for sunbathing and picnics.
The whole family will love snorkeling here as the bay is alive with all kinds of reef fish and I don't think I've ever been here that I did not see at least 5 or 6 sea turtles. Turtles love sea grass and, as you can see in the photo, there are several sea grass beds here. We usually anchor over in Lee Bay and dinghy around.

Lee Bay is perhaps one of my favourite overnight anchorages in the BVI. You won't find any mooring balls here, so anchoring is a necessity. There's good depth, good swimming and good snorkeling. What I like most about it is that most people are too lazy to anchor, so they move on to find easier pickings. 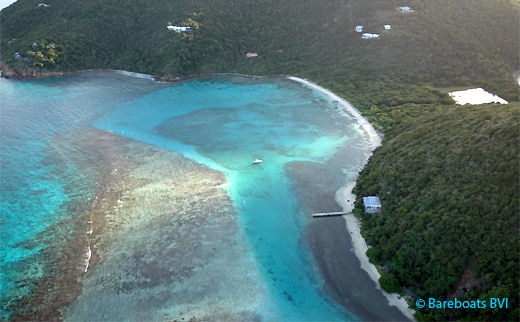 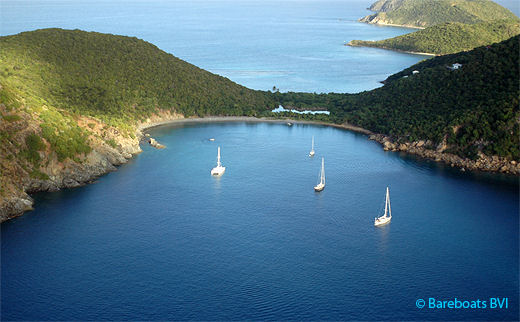 
Lee bay has a rocky shoreline, but you can land a dinghy here. You can be assured of the best breeze at night, if you anchor in about 15' to 20' of water, just about dead center of the bay. In fact, if you go a tiny bit further up into the bay and a little bit to the left than the furthest boat in the photo above ... that's the sweet spot.

I've always been quite interested in the geographic nomenclature of the British Virgin Islands and Great Camanoe has at least one intriguing place name; "Throw Away Wife Bay".

For instance, there are several places (all over the globe) called Push or Pull and Be Damn (or be Damned) bay, point, narrows, road, etc. Nautically, it refers to the difficulties mariners typically faced rounding a particular point, entering or exiting a bay, making safe passage through a narrow channel, etc. Head winds, rough seas, ground swells and other difficulties could be expected in such places. "Pull and be Dam" was a pretty standard name to find on a nautical chart back in the day ... and would be considered a "pucker" zone for sailors, using today's vernacular.

Having said that, I have never come across another place in the world called "Throw Away Wife Bay". One can only surmise that this is one location named for an event, and that some brutish character actually threw his wife overboard here. The bay was likely named in honour of this dastardly deed, by someone who witnessed the event.

Of course my assumption is pure conjecture, but I believe it has merit, given the type of rogues who sailed these islands at the time, and the way in which early nomenclature was developed.

I should note that there is a lovely little beach at Throw Away Wife Bay and a much larger but equally beautiful beach just north of here called North Bay.