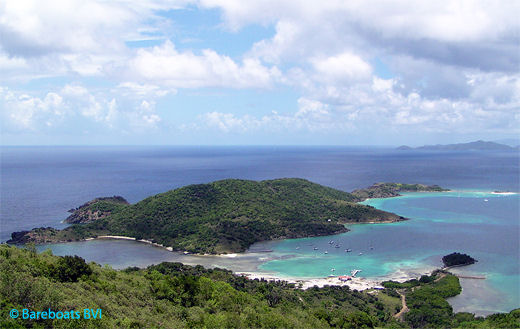 One small family lives on the island and they've established a great little bar here called the B-Line Beach Bar. There's very little else on the island other than the Quaker ruins at the Lettsom Settlement and the remnants of a few failed enterprises dating back to the early 1970's and later.

Little Jost Van Dyke's most famous son was Dr. John Coakley Lettsom, (aka Lettsome) a Quaker and early abolitionist, who was born here in 1744.

Young John was sent away to be educated in England when he was just 6 years of age. It wasn't until he was 23 that he returned to the British Virgin Islands. By that time, both his father (Edward Lettsom) and older brother had passed away. Astonishingly, the young man (who was studying to become a doctor) had not seen his mother (Mary) in all that time.

John was returning home to deal with matters concerning what was left of his father's once ample estate that included Green Cay, Sandy Cay and a sugar plantation in Cane Garden Bay on Tortola. His brother managed to fritter away nearly everything of value, but somehow held onto the slaves the family owned.

A caring and compassionate man, Lettsom believed slavery was morally and ethically wrong. One of his first acts upon returning home, was to free all the slaves he had inherited some 67 years in advance of the emancipation proclamation in 1834. He was the first slave owner in the BVI to do so, He also convinced several of his well to do friends (in the Caribbean and England) to free their slaves too.

At this point, the young man was all but destitute and could not afford his return passage to England. Having refused to sell his slaves (which would have brought a tidy sum) guaranteed himself zero income. He spent the next 6 months on Tortola practicing medicine, despite not yet having earned his medical degree. He managed to earn quite a nice little nest egg. He gave his mother (who had remarried) half his earnings and was able to return to England to complete his studies. He never again returned to the BVI.

Lettsom earned his MD on June 25, 1770 at the age of 26. At 30 he founded the Medical Society of London, which today is the oldest medical society in the U.K.

He married a well to do socialite and set about establishing one of the largest and most successful medical practices of his time.

By all accounts, Dr. Lettsom was a very kind hearted man and a generous philanthropist who contributed greatly to society at every opportunity. He was a prolific author and a founding member of the Royal Humane Society. The list of charitable organizations he supported goes on and on. 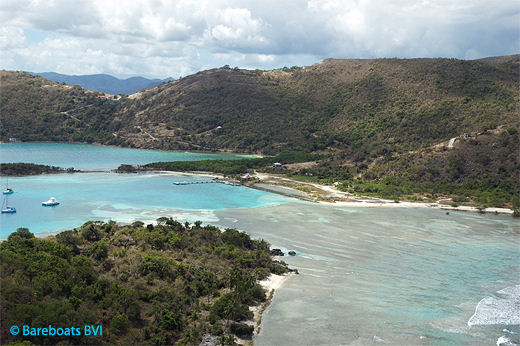 Isthmus between Jost Van Dyke and Little Jost Van Dyke
He led an extraordinary life before his death on November 1, 1815 at the age of 71. His friends included such notable persons as Benjamin Franklin and fellow Quaker and British Virgin Islander, Doctor William Thornton, who designed the U.S. Capitol building. He was buried at the "Friends" (Quaker) burial ground on Little Coleman Street, Bunhill-row, England.

In 2008, an archaeological expedition comprised of several students from UC, Berkley, uncovered several artifacts from a small area that had at one time been the homestead of the Lettsom family on Little Jost Van Dyke. These artifacts are being held at the H. Lavity Stoutt Community College, for further study.

In the second photo, the isthmus between Little Jost Van Dyke (in the foreground) and Cape Wright, Jost Van Dyke is clearly visible. You can actually wade across quite easily on calm days.