Tortola in the British Virgin Islands 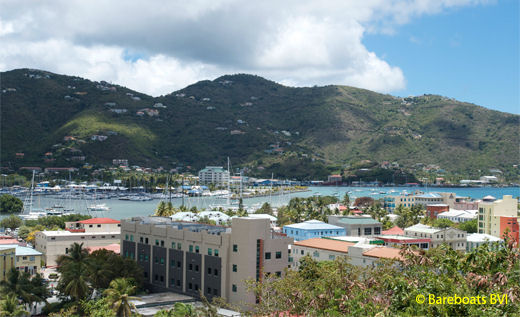 The island of Tortola
Bordered by the historic, Sir Francis Drake Channel, Tortola has a rich history of fishing, farming, sailing, pirates and privateers. This island is known worldwide for its marvelous beaches, aquamarine waters, yacht charters and offshore banking.

Road Town is home to several bareboat charter fleets. In 1969, Charley and Ginny Cary launched "The Moorings" with only three boats in their fleet. That number quickly grew to six and has continued to grow exponentially. Today, there are no fewer than about 14 charter companies and more than 800 yachts (both bareboat and crewed) based in the British Virgin Islands, arguably the most popular sailing destination in the world!

Tortola is Spanish for "Turtle Dove", a shy little brown dove which is often seen in the hills or flying along various dirt roads.

Tortola Map
The people you'll meet here are as diverse as her villages. The establishment of both the yacht charter industry and offshore banking have attracted a large expatriate population from all corners of the Earth.

The center of activity is in the capital, Road Town, which is becoming more modern every day. According to the 2010 census report, the population of the British Virgin Islands is approximately 28,054 with 23,419 or about 86% living on Tortola. The territory's existing infrastructure would suggest a population of several times that number. The first stop light (which made front page news in local papers) was installed in Road Town in 2003. We've come a long way since then.

There are 4 National Parks on the island, including Mount Healthy which is the island's only remaining sugar mill. Other parks include Sage Mountain, J.R. O'Neal Botanic Gardens & the Queen Elizabeth Park.

There are several historical sites too ... but many are hard to find and may not be evident to the average passerby. One of the more noticeable and easy to reach sites is St. Phillip's Anglican Church, built in 1826. There's more to come!

When planning your sailing itinerary, you'll want to be sure to include a stop at the Callwood Rum Distillery in Cane Garden Bay built some time in the mid 1700's. It is the oldest, continuously operating distillery in the Caribbean. It's a very small operation but very interesting and well worth the time to visit and see a small slice of living history.

Of course you will want to stop by the world famous Bomba's Shack, watch the surfers, enjoy a spectacular sunset and perhaps even attend a full moon party if your charter dates permit.

There's lots to discover on Tortola and I hope we have provided you with sufficient information to whet your appetite! There's quite a bit more info to come as and when I find the opportunity to work on our website, so drop in to see what's new from time to time!