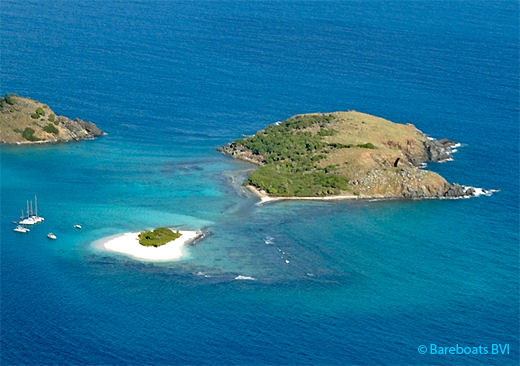 In 1935, Louis and Beth Bigelow purchased Guana Island for their personal use and sold it 39 years later (1975) to current owners, Henry and Gloria Jarecki. The Bigelow's also owned nearby Green Cay and Sandy Spit and retained ownership after they sold Guana Island.

Louis Bigelow passed away in July, 1987 and Beth died sometime in the late 1990's. Ownership of Green Cay and Sandy Spit then passed to their son, Kim Bigelow. Neither island had ever been developed and visitors had always been permitted free access by the Bigelow's to visit these little gems to enjoy the natural wonders that exist here.

There was a rather big commotion back in 2003 when Kim Bigelow decided to sell both islands. Panic rippled throughout the BVI tourism sector at the thought that these two very special islands might fall into the wrong hands and be developed, spoiling their natural beauty.
Foxy Callwood of Foxy's Bar and Restaurant fame, picked up the gauntlet and led the charge to save both Sandy Spit and Green Cay from any would be interlopers. He and other concerned citizens decided they had to somehow raise the $1.7 million the Bigelow's were asking for the islands.

Thankfully, the government of the day came to the rescue and bought the two islands in order to preserve their natural beauty for future generations. They now fall under the auspices of the BVI National Parks Trust.

On calm days, diving and snorkeling on the eastern shore (ocean side) is marvelous. The dive site is called "The Playground" and here you will see a plethora of reef fish as well as large fish such as manta rays, sharks, jacks, and I even saw a lone dolphin hanging out here once, many years ago. Gorgeous area and a wonderful dive site!