Exploring Norman Island in the BVI

There are lots of islands, cays and bays to explore in the British Virgin Islands, but few hold as much intrigue or capture one's imagination, quite like Norman Island.

If you like hiking, you'll find two roads that begin beside and behind Pirates Bight Restaurant. The first is a short and rather easy hike out to Turtle Cove. Be sure to bring water with you. Even though it's a short hike, you will need it as there is very little shelter from the sun until you get to the cove. You'll need a hat too.

The road begins beside the temporary restaurant on the east side of the beach and offers a nice view of The Bight and Treasure Point. Turtle Cove (photo below) has a rocky little Beach and aside from some much needed shade, I didn't find very much else there. 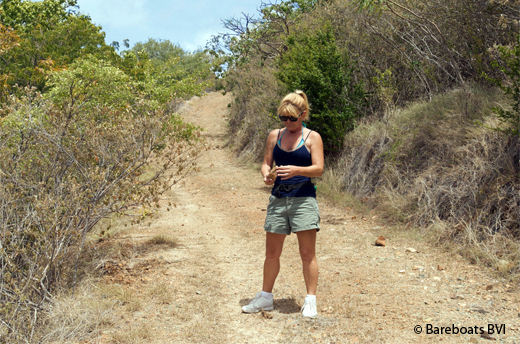 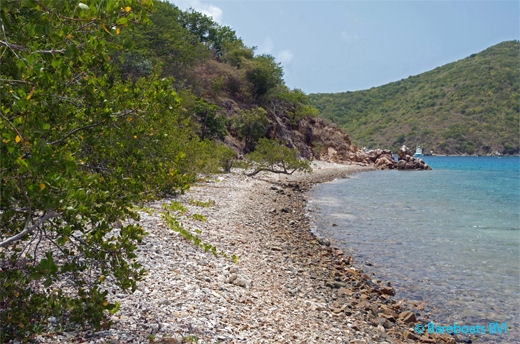 
That leads to the question, why is the road there? My hunch is that there are future plans for this spot. What those plans may be, I have no idea. Development is inevitable and those of us who have had the opportunity to enjoy Norman Island in its pristine state, should be very grateful.

Having said that, I think this would be a good spot for a small marina with a fuel dock and perhaps a little convenience store for island residents and yachties alike. I'd also move the dive shop here and perhaps add a small water sports outlet. There is room here to do all that and it could be very tastefully done, without being intrusive. 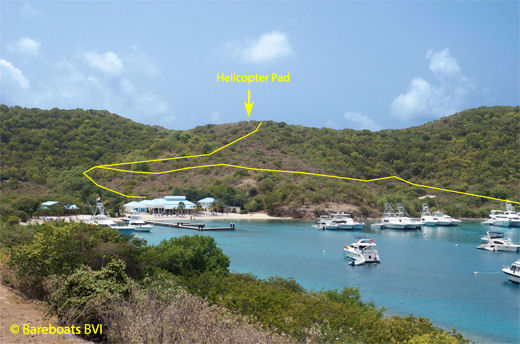 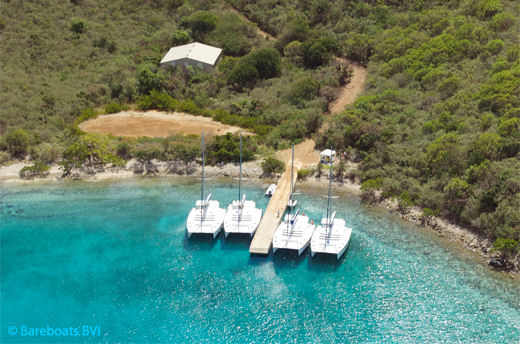 
The second road leads up to the crest of the hill behind the restaurant, overlooking what Tom Warner says is named South Bay but others insist is all part of Money Bay. I hope to clear up the confusion at some point, but no luck so far.

Pay close attention if you don't want to end up in the wrong place.

This road behind the main restaurant splits off to the right as you ascend the hill ... and if I recall, there is a cement patch there. According to Tom nine out of ten times, people choose the wrong way, because frankly, it looks easier ... and it is. But unless you particularly want to see Pirate's Bight Warehouse, don't turn right at the fork in the road. Stay left and keep going straight up the hill. I have drawn an approximate route in yellow in the photo above. And if you do take a wrong turn, you will end up at the service dock also seen above.

Assuming you do not take the wrong turn and once at the top of the hill, you will see Money Bay on the south side of the island. If you hang a left and go up a little bit, you'll find the helicopter landing pad. From here, you have a great 360 degree view of the Sir Francis Drake Channel, Tortola, Peter Island and much of Norman Island.

There are several trails all over the island. From the top of the hill, you can go all the way down to Money Bay, follow the road around towards the ruins and Benures Bay or even all the way out to the east or west end of the Island. Be sure to let people at the restaurant know where you plan to go. If going very far, it would probably be smart to take a cell phone and/or a hand held VHF with you. You never know when you might need them. 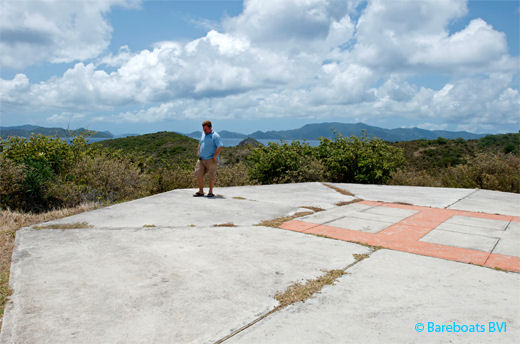 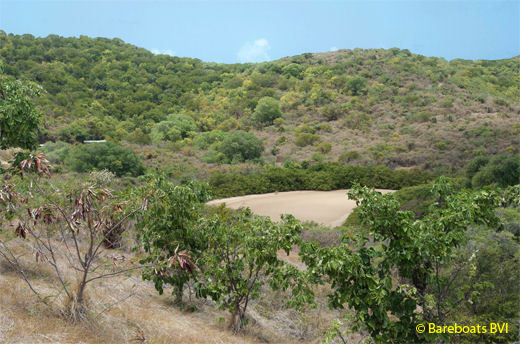 
I love history, so I wanted to see the ruins of the plantation era great house. I had seen them once before ... many years ago, but memories fade and this time I brought my camera.

Your friendly restaurant manager, Rupert Starkey, helpfully mentioned that there was a short cut to the ruins by way of a goat path he pointed to. The "short cut" starts on the road going out to Turtle Cove and goes straight up to the communications tower just up the hill from the temporary restaurant. "Great", said I ... and off we went.

Part way up the hill, the salt pond (pictured above) which is situated a couple hundred yards behind the restaurant, came into view. 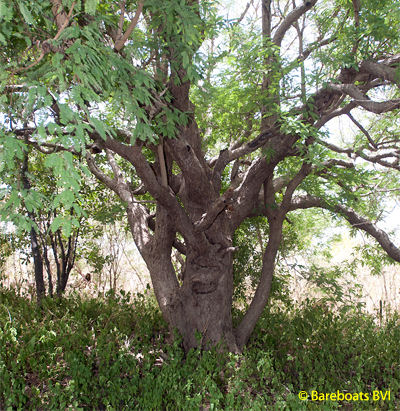 Tamarind Tree
Billy goats and I have pretty much nothing in common. Given that knowledge, the words "goat path" should have clued me in. I am no spring chicken and it is safe to say that my mountaineering days have long passed.

The grade on the hill is about 70 degrees. So unless you are under 60 and as fit as a billy goat, (I am neither) ... I wouldn't recommend the goat path. Nevertheless, I did it because by the time I realized I had bitten off more than I could chew, there was no way my tricky right knee would take me back down that darned slope!

Once at the top of the hill and during a good long rest under a lovely big tamarind tree, my friend Cindy pointed out that we were sharing our tree with a herd of hermit crabs, aka soldier crabs.

The name implies that these are solitary critters, but that is hardly the case. There had to have been at least 40 to 50 of them spread out over a three foot square area. They ranged in size from very tiny (the size of a dime - see top right of photo) to quite large, about the size of my fist. They had each managed to source what Virgin Islanders call whelk shells to use as their portable homes. The shells are also known as West Indian Top Snails and are a favourite abode for these Caribbean Hermit Land Crabs.
Clearly we had intruded on their afternoon siesta. Like town criers, two of the smaller ones went around waking up all the others. First they jostled their shells, and if that didn't work, they climbed over top of them, grabbed the edge of the shell, yanked on it and tipped them over. They basically stampeded to a new spot about 3' away and settled back in again. The clattering noise they made while making their big exodus was particularly humourous ... though I did feel quite guilty for having disturbed them. 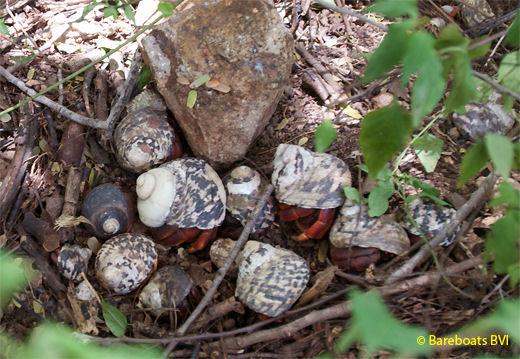 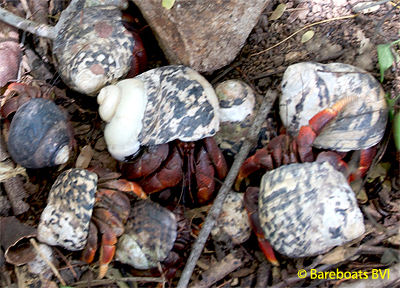 Close-up of the Little Critters


After I polished off an entire bottle of water, off we went to see the ruins.