Money Bay on Norman Island in the BVI

Money Bay on Norman Island in the BVI
I'd like to clear up what may be a misconception ... but unfortunately, I can't. Here's my dilemma: On every modern chart and map I have located thus far, "Money Bay" is the only identifier of a very large area covering a major portion of the south side of Norman Island that encompasses seven very distinct bays.

The headlands separating these bays are very pronounced. Anyone can see they are all separate bays.

Tom Warner (operations manager at Pirates Bight Restaurant and who has lived on Norman Island for several years) claims that the bay marked #1 on the principal photo and seen in the photo below is actually called South Bay. He claims he saw that name on a survey map that the owner, Doctor Henry Jarecki has.

As you can see in the photo below, the bay that Tom calls South Bay, is a very large and very distinct bay. In my quest to clear up the matter, I made a trip to the Survey Department. Sadly, I came away with no clear cut answer. Though I did find a survey map, I was unable to locate the survey map that included this name, nor any reference whatsoever to "South Bay". Sigh. 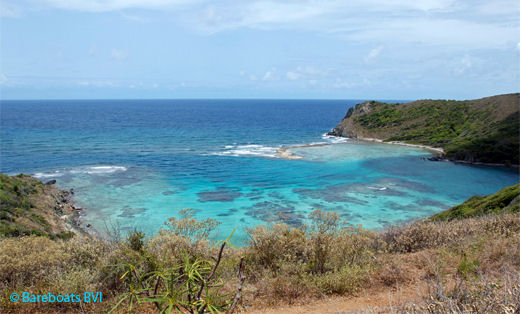 What Tom refers to as 'South Bay' 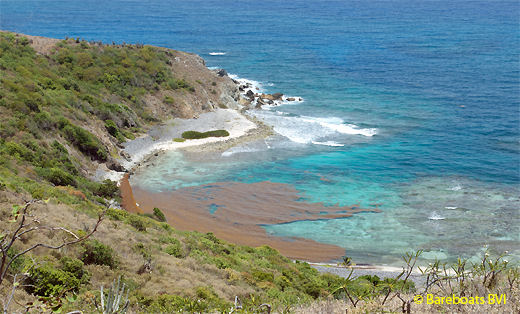 Another View of the Bay


For now, I will go along with the crowd and say it's all Money Bay ... even though I think Tom is likely correct. But here's my question: Nearly every single bay in the BVI is named. Why is this island different?

Pure Speculation and Conjecture on my part:
I believe the vagueness is intentional. I believe that at some point in time, the British government of the day purposely obliterated any specific names identifying the individual bays because of the yet to be found treasure associated with the Nuestra Senora de Guadalupe. Only "some" of the treasure was located and It's believed the remainder is still out there somewhere.

Anyway ... I am not going to give up trying to get to the bottom of the missing names. There has to be historical information somewhere. And now that I've made all that as clear as mud, we can move on.

From time to time and usually in the summer months, sargassum finds its way into the Sir Francis Drake Channel and around various parts of the BVI. In the photo above, you can see a mass of it in the north east corner of what Tom refers to as South Bay. It is rather yucky stuff and smells dreadful (like rotten eggs) when decomposing on shore ... but if you ever get a chance to see what's under it, you'll be amazed. There is a veritable colony of sea life that travels with sargassum.

The one and only time I dived below a sargassum float I was absolutely blown away. There are thousands of little tiny little critters using the sargassum as a safe haven. I saw baby everything in there! I even saw a baby seahorse that was barely the size of the tip of my finger! I also saw critters I couldn't identify and have never seen since.

Alas, it turns out that I am very allergic to whatever gasses are contained in the little polyps that make the sargassum float. Immediately following that dive, I spent a week of misery. My eyes watered constantly and I was seriously congested to the point that I found breathing very difficult. Not pleasant at all. But I have a lot of allergies, so I wasn't terribly surprised. 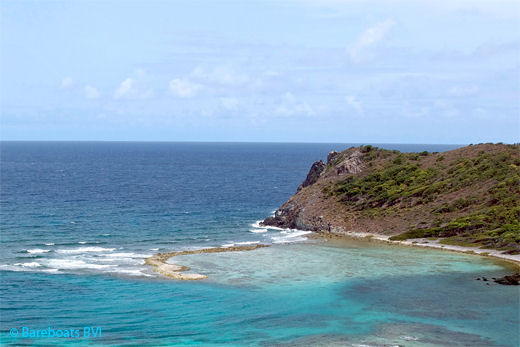 Surf Break, Norman Island
I openly admit that I am a bit of a coward. On rare occasions, I have seen yachts up in the far west side of Money Bay ... the part Tom calls South Bay. Quite frankly it amazes me that anyone has the brass to go in there! The entrance is very tricky and if you miscalculate, you could find yourself in world of trouble. There are two visible reefs coming off both sides of the bay.

If you do manage to wrangle your way safely in here ... treat this as a day anchorage only and on dead calm days only. I can't advise you where to anchor, as I've never done it myself and if you have to exit in a hurry due to changing wind and sea conditions, good luck with that! Be sure you have someone with a good pair of eyes and lots of experience on the bow directing you.

This is definitely NOT a recommended anchorage but as I said, I've seen it done. Keep in mind that should anything go wrong, help is a long way off!

According to Tom, surfers sometimes visit the break area seen in the close up above.

If I had been in Owen Lloyd's shoes, this is where I would have buried the stolen treasure of the Nuestra Senora de Guadeloupe, assuming I had the guts to run the cut into the bay! The approach runs straight across the end of the bay from the east side. The water is quite deep there but gets shallow pretty quickly. Tom told me there is 6' to 6.5' feet of water inside the bay. I'll hasten to add, there are a lot of coral heads too! I am guessing snorkeling would be fabulous here.

There are a couple of nice places to anchor in the rest of Money Bay with places for one or two yachts ... but unfortunately I don't have photos and am reticent to give directions due to the area being so large and several parts of it looking like another. That will be another project at some point in the future.