Fallen Jerusalem in the BVI 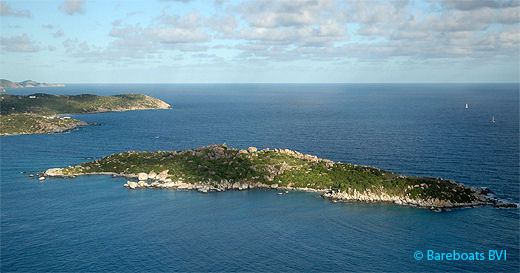 Fallen Jerusalem - National Park
One of the places I have (almost) never told anyone about is Fallen Jerusalem, located just south of Virgin Gorda. I suppose it was a little bit of selfishness on my part as it is one of the places to which I like to escape on a nice calm day. But alas, the internet puts everything out there these days and it has been discovered, much like just about every other corner of the British Virgin Islands has been discovered, so I figured I may as well do it.

While everyone else is heading to The Baths or Devil's Bay from Tortola, you may want to cast your gaze at the unassuming little island on your starboard side. It's a bit like an "introduction to the Baths", with similar terrain and massive boulders, but without the crowds. It may not be quite as spectacular or dramatic, but it's no slouch and the little beach is marvelous when the weather permits.
This island was acknowledged as an important sea bird sanctuary in 1959 and was declared a BVI National Park in 1974. Exploring the park is fun and quite interesting. Bring a good pair of runners and don't forget to take some water with you. You'll need it!

Mind your step as I have come across several nests on the ground here. I once found a single light brown egg just lying on a boulder at the edge of a steep, 6' drop. I was worried that it would be blown off and broken, so used a leaf to lift it and gingerly moved it back a couple of feet, to a small indent in the boulder just the right size to hold the egg safely. I didn't want the mother to detect a human scent on her egg. 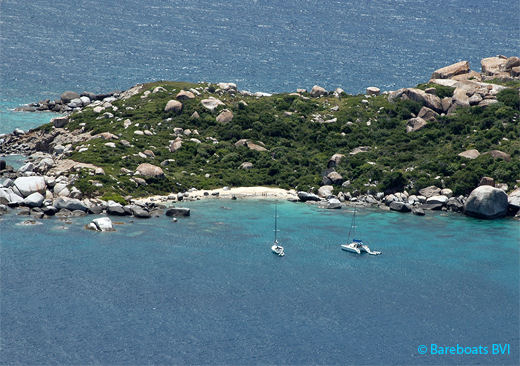 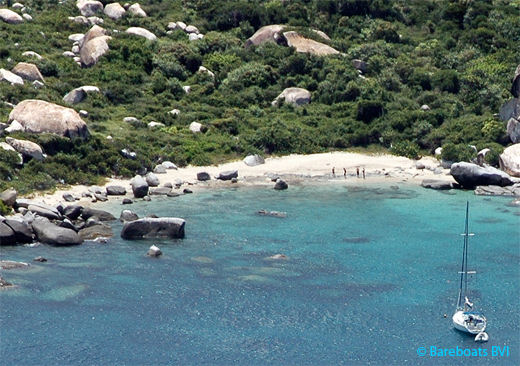 
Species found on the island include the usual suspects such as laughing gulls (which make quite a racket at times), pelicans, noddies (which are in the tern family), and several other terns such as the bridled tern and the odd looking royal tern.

Fallen Jerusalem is also a haven to the threatened but not endangered red billed tropicbird. Despite the fact that it is not yet listed as endangered, the worldwide population of these very pretty and graceful birds is in fact declining.

There are a few beaches to be found here and two mooring buoys have been provided by the BVI National Parks Trust at North Lee Bay, which is also the nicest beach on the island.

Though the NPT folks do their best to keep the moorings in good shape, I have been there twice when at least one of the mooring balls was missing. In a dinghy, this is relatively easy to deal with but in a larger boat, you had best move on and choose a different destination if the mooring balls have gone AWOL. Provided the moorings are in tact, you'll find them in the general vicinity of 18° 25' 9.69" N and longitude 64° 27' 12.14" W. 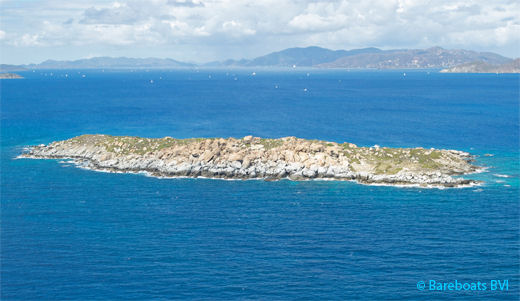 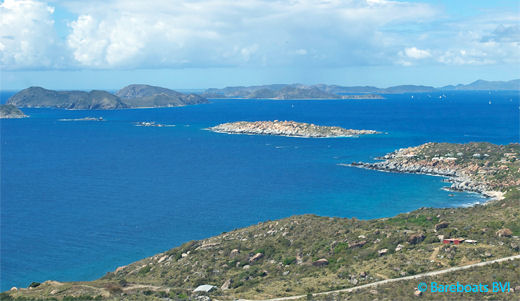 
Snorkeling is good here and I'm told there are some underwater caves on the south side ... but I've never dived there myself.

Trailing west of Fallen Jerusalem are three above water piles of rocks called Broken Jerusalem as seen below.

Notice to Boaters: This is not a suitable overnight anchorage. The area is subject to swells that can develop very quickly as the island is very exposed to open water from the south.