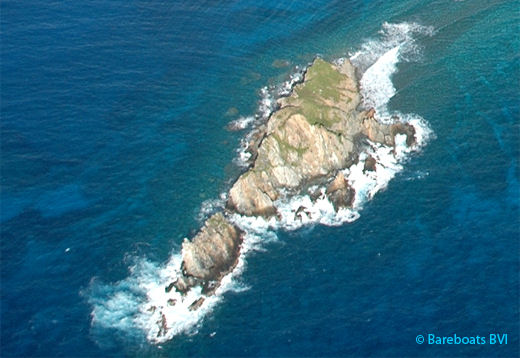 Uninhabited Islands, Cays & Rocks
There are no fewer than 43 uninhabited islands, cays and rocks in the British Virgin Islands. I know there is a finite number ... and one of these days I may be able to state (with some degree of certainty) what that final number really is! :)

Some of the larger islands and cays are national parks, bird sanctuaries, and protected areas. Others are just very small and unsuitable for human habitation but are of interest for navigation. Each is unique and has its own story.

In my quest to put a name to and identify all of the cays and rocks you will see on your charts or take note of in your travels around the BVI, I have had to refer to a good number of maps and nautical charts. Those marked with an asterisk are rocks or cays I have still been unable to identify so have loaned them names (identified by an asterisk) simply to have some sort of identifier. We'll get there one of these days and hopefully put an end to any further guess work.

The list is still growing and hopefully (with a little help from those in the know), we will get it all straight one of these days!

Without further adieu, here they are in alphabetical order. Have fun exploring!


One of the maps I was able to locate was first printed in August, 2006 and revised in July of 2010. The map was researched by Ermin Penn. Ermin is the resident historian at the BVI Tourist Board and a walking, talking font of historical information. She's a living treasure in and of herself.

The map (which is stamped Town & Country Planning Department) was produced because up until this first printing, no map existed containing many of the historic names of all these places. The map is a little difficult to follow as the names given to the various places do not pinpoint precise locations or give GPS coordinates. Several cays and rocks are very close together, and that has caused some confusion over which names belong to which rocks or cays.

Having said that, the existing map is a very good start! So bearing in mind that some names and their exact locations may be somewhat blurry in my translation of the map, at least we have names for them. I am sure Ms. Penn will make more revisions in future, as the map is perfected, and if able, I will make corrections accordingly.

I have tried to photograph and provide coordinates for as many as possible and will add more as time and circumstances permit.

It should be noted that prior to several land reclamation projects that began back in the 1960's, there were additional islands, cays and rocks in existence. Those places and names have literally been wiped off the face of the map. I am working on that information as well, just so there is a record of them somewhere.

Reclaimed Islands, Rocks and Cays (who's names and physical forms have completely disappeared)