The Carvel - A.K.A. Caravel Rock 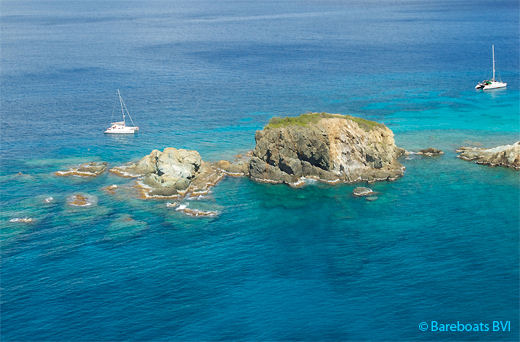 Given the right sea and weather conditions, The Carvel is a very nice, out of the way day anchorage and a lovely spot to dive or snorkel with excellent visibility. It is not suitable for overnight stays as the area is exposed to southern swells and quickly changing weather conditions.

Not to be confused with Carvel Rock, located at Cistern Point, Cooper Island or Carval Rock which lies between Cooper and Ginger Island. On some maps and charts, this particular group of rocks is also known as " Caravel Rock".

To confuse matters further, some websites use these names interchangeably. I suppose the confusion stems from the fact that Caravel, Carvel and Carval, all refer to the same thing.
A "Caravel" was a relatively small, but particularly fast sailing ship of Spanish and Portuguese design, made popular during the 15th, 16th and 17th centuries. Both the Santa Maria and the Nina used in Christopher Columbus' explorations were Caravel ships.

I asked myself why so many rock formations around the world are named Caravel, Carvel or Carval? I "think" I have an explanation. This is pure speculation on my part, so if anyone has a better explanation (based in fact), I would love to hear from you.

Keep in mind that back in the 15th, 16th and 17th centuries, (when various oceans of the world were first being charted) several countries were investing heavily in exploration and exploitation of newly discovered lands. The Spanish, Portuguese, Dutch, French and English all wanted to stake their claims in the Caribbean. Naturally, this opened the door to aggression between the rival countries. Freebooters, privateers and pirates were all over the Caribbean.

From a distance, and at various times of the day or night, it would be difficult for sailors to distinguish various rock formations from other ships. Spy glasses were handy to have, but they were only good up to a point. A lump in the water within close proximity to an island, could easily look like another ship, lying in wait for treasure laden ships cruising the Caribbean Sea.

My theory is that sailors used the words Caravel, Carvel or Carval (depending upon which language was spoken) to mark a known rock on their charts that looked suspiciously like a ship, so they could rule out any threat the next time they passed the same location.

That's my best guess as to why there are three different rocks with very similar names, all in close proximity to one another. And to add another rock to the pile, there is another Carval Rock off the eastern tip of Congo Cay in the U.S. Virgin Islands that's not very far away.