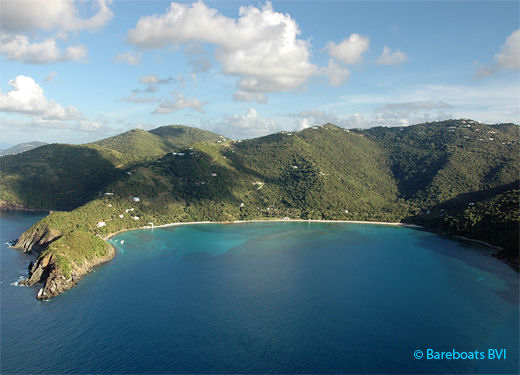 Brewer's Bay - Tortola
A quiet haven with a beautiful beach. This is what the BVI is all about! For those who wish to find solitude amidst a beautiful setting, Brewer's Bay is your place!

This peaceful haven remains one of Tortola's most secluded beaches. Access is a tad unnerving for some visitors as the road consists of several switch backs and rather steep descents some would rather not attempt.

Access by boat is more than a little dicey and is not permitted by any of the charter companies due to underwater power cables lying across the bay that can easily become caught by a misplaced anchor. Obviously, the fellow who owns the motor yacht in the photo below is blissfully unaware or simply chose to ignore his charts.

Nicole's Beach Bar is usually the only business open. Nicole rents beach chairs, serves ice cold drinks and offers a basic assortment of lunch and snack foods. Pull up a chair and watch a game or (Nicole's favourite) Court TV ... he always has the TV on!
The water is very shallow running quite a distance out from shore, making this an ideal spot for young children to play safely, under adult supervision. 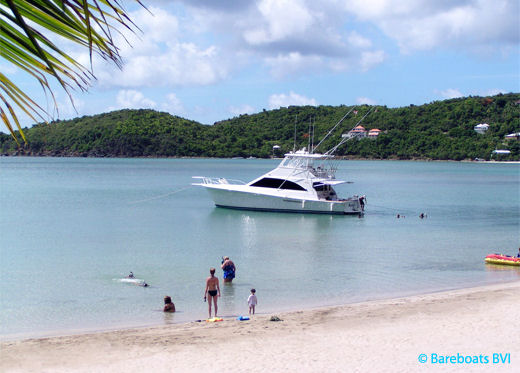 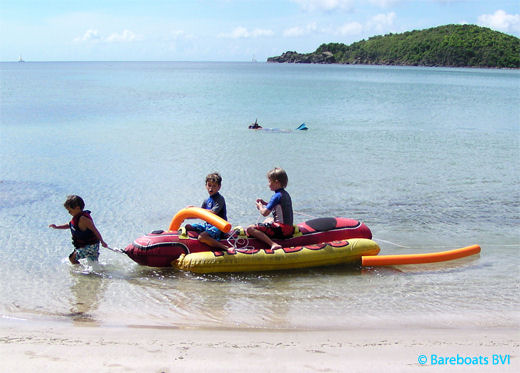 
Snorkelling is terrific here and the best spot is on the west (left) side of the bay, around into the second cove past the rocks. It's a bit of a swim but it's worth the effort. I've seen all kinds of things here including squid and a tiny little seahorse. 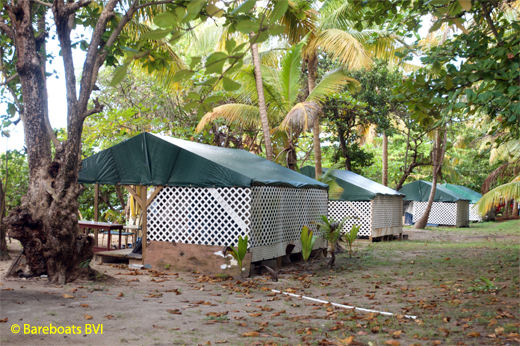 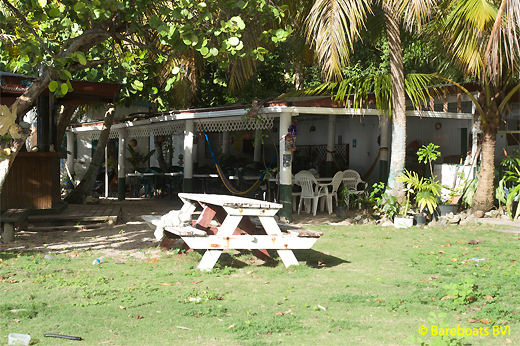 
The Brewers Bay Campground (seen above) has undergone a rather impressive clean up in recent years. It is hidden amidst the coconut palms, sea grapes and almond trees that line the beach. Avid campers from all over the world head to the British Virgin Islands for their annual camping vacation here.

Please don't call or write me asking for the campground phone number or more information about the campground. I am only putting this info on the website for yacht charter clients who may be interested to know that there is a campground here should they want to stay there for a night or two before or after their charter. The phone number listed on several out-of-date websites is no longer in service.

When I drove over there to take photos, there wasn't a soul around and there is no phone number posted on their sign or anywhere else that I could see.

The most recent information I found is that the new number is (284) 545-4905 but when I called it, I got a voice mail and didn't bother to leave a message so I don't know if it's the right number or not. I called the BVI Tourist Board, who said they would call me back ... but that didn't happen. Maybe you'll be luckier than I. 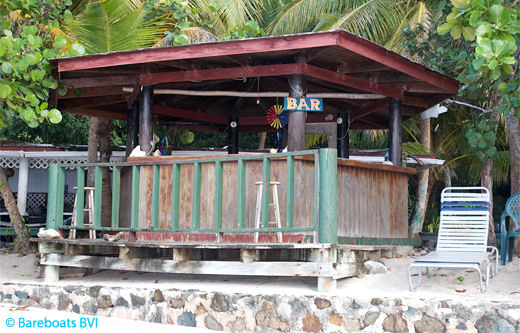 
The Bamboo Bar (above) is part of the camp grounds but in more than 20 years, I have never once seen the bar open. Facilities include washrooms and cold water showers. This is a "no frills" camping area and those visiting would be well advised to bring plenty of insect repellent.

Having said that, it also has to rank amongst the top ten most beautiful camping areas anywhere. Quiet, secluded and a fabulous beach at your disposal! Who could ask for anything more ... other than perhaps some way to get hold of them!

Oddly enough, people rarely ask how Brewers Bay got its name! Well, here's the answer even if you weren't curious. The ruins of this once very busy distillery, presumably built sometime in the 1700's, can be seen from the road just behind the shore line. Its roof has been replaced by a coconut palm canopy with undergrowth springing up through the floor. Pieces of machinery and distilling accessories from the sugar mill, similar to those seen at Callwood's Rum Distillery, remain exactly where they were abandoned sometime in the 20th century.

Icis Villas are located across the road from Nicole's. So if camping isn't your thing, but solitude and a beautiful beach are ... give Icis a call!