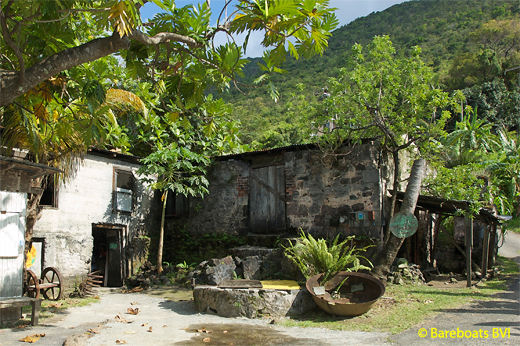 Callwood Distillery - Cane Garden Bay
The Caribbean is the birthplace of rum with production dating back to the mid 1600's. It was in places throughout the British Virgin Islands, not unlike the Callwood Distillery, that rum was produced for export to Europe, North America and beyond.

The distillery has been in the Callwood family since sometime around the late 1800's, and today is operated by Michael Callwood and his family.

The door to the boiling room (shown below) looks ancient by island standards. Although it is unknown exactly how old the Callwood Distillery is, the style of stone and brick architecture, widely used by the British throughout the Caribbean, would suggest that it dates back to the mid 1700's, or thereabouts.

The Callwood Distillery is the only continuously working rum distillery in the BVI. At one time, there were as many as 26 distilleries here. Many have completely disappeared but the ruins of others can be found dotted throughout Tortola and the other islands. One of those ruins is right next door in Brewer's Bay. 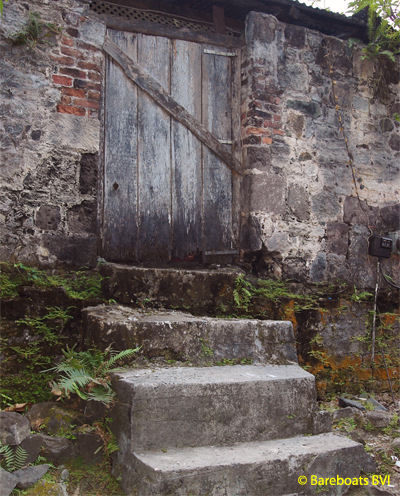 Door to the Boiling Room
The family grows some of their own sugar cane (saccharum) which takes about a year to mature, growing to a height of 10' to 12'. Sugar cane is a type of grass and is in the same genus as maize (or corn), rice and others. They do not have sufficient land to grow all the cane that is required, so they buy the rest from local suppliers on Tortola.

Once the sugar cane is ready to be harvested, the tops of the cane (with the leaves) are cut off and replanted for the next harvest. The stalks are then cleaned in preparation for the press mill. Rum is made just once a year. The process begins in March and continues until August.

The press mill (seen below) is driven by a system of flywheels and gears, once powered by donkeys that walked around in circles, turning a long wooden arm with gears attached to the primary fly wheel. These days, a diesel engine supplies the horsepower ... or should I say donkey power.

A traditional sugar cane press works in a similar fashion to an old ringer washer. The raw canes of sugar are fed through the press mill where the cane is crushed and the juice is squeezed out into a trough, leading to a large cement tub. The juice is then fed into large open copper pots, referred to as "coppers", which are assembled inside the distillery.

You can see a video of two types of sugar cane presses in operation here. Sugar cane juice is often enjoyed in it's pure form immediately after being pressed. The music is annoying but the video tells the story. 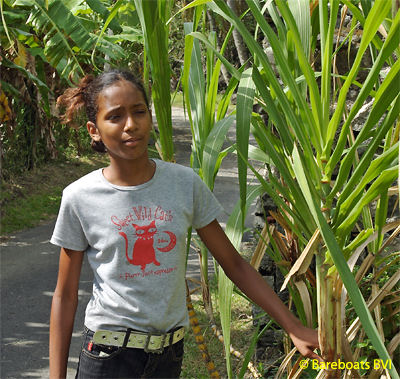 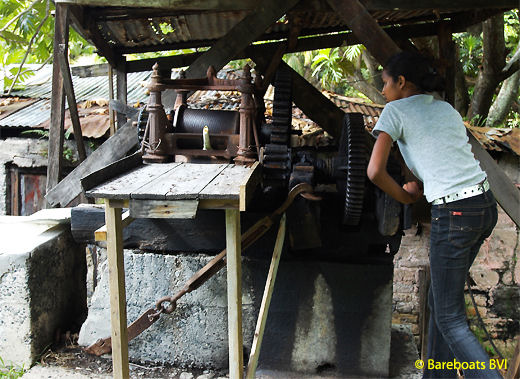 
The spent stalks of the sugar cane are dried in the sun, stored in the shed (seen below) and used as fuel to fire the stills. 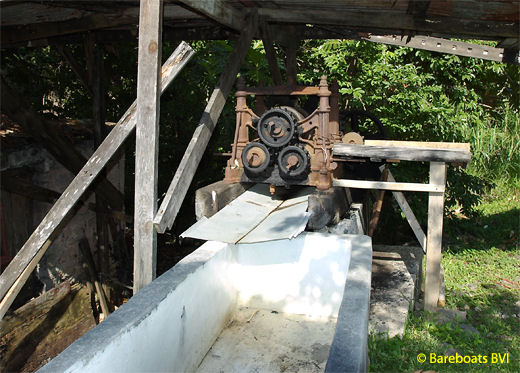 View of the Sugar Cane Press 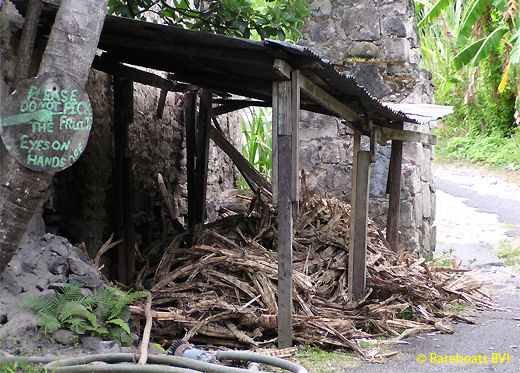 
Water is added to the juice and boiled for 3 hours. If it is boiled any longer, it will become molasses, which the Callwood's don't want. The liquid is then cooled and transferred into oak barrels to ferment for approximately 8 to 10 days ... give or take. This produces a sugary wine which is now ready to begin the rum distillation process.

The large stills can hold about 4 barrels at a time. They load the fermented juice into the still, fire it up and slowly but surely, "young" rum is produced through a condensing system of coiled copper tubing. No preservatives or other chemicals are added. 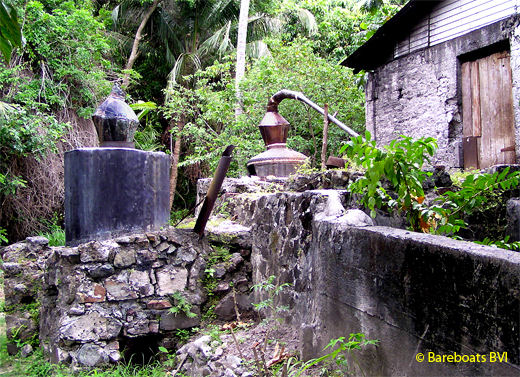 The stills at Callwood Distillery 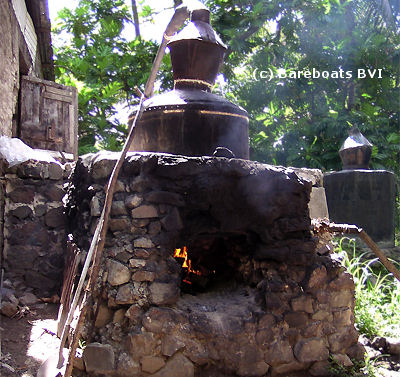 A still in operation at Callwood Distillery


Rum sold by large producers is made from molasses. According to Michael Callwood, using sugar juice in its pure form (rather than processing it into molasses) and adding preservatives, is a preemptive strike against hangovers!

Michael is very proud of their brewing method because larger operations can't do it. It's just not economically feasible because the juice must be boiled and processed immediately after harvesting the cane, otherwise the juice is subject to contamination. Michael believes (and many rum connoisseurs would agree) that this sets Callwood's Rum apart from all those who use molasses.

The fermented liquid is then boiled again, producing alcohol. The brew is slowly cooled in coiled, copper tubing, stored in oak barrels and aged for about 4 years, over which time the rum develops its own unique flavour. 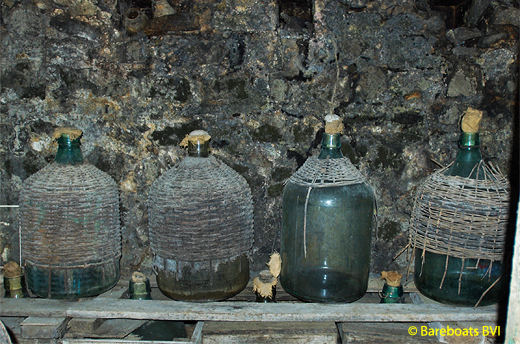 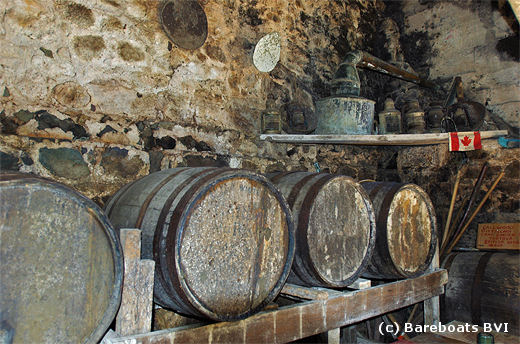 In the late 1800's, a buccaneer named Richard Callwood (who owned Little Thatch Island) bought the Arundel Estate in Cane Garden Bay for his son, Richard Jr. The estate included the Callwood Distillery.

Richard Jr. (who was Michael's great grandfather) was the progeny of one of Richard senior's slaves. The distillery has been handed down from one generation to the next. 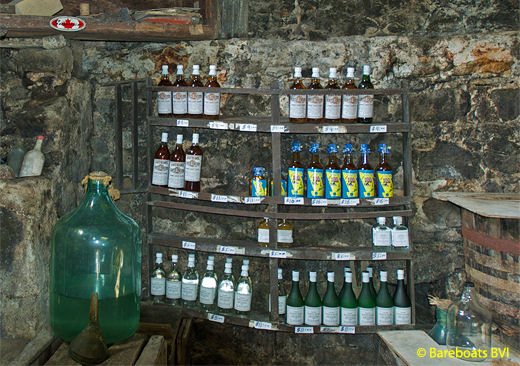 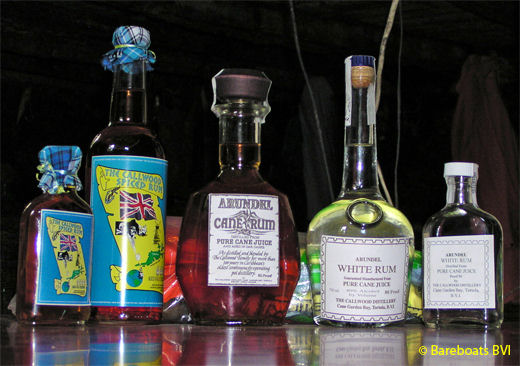 
Many claims are made about the medicinal effects of Callwood's Rum, but as there aren't any scientific studies offered as proof, we'll just have to take Michael's word for it!

Sadly, insufficient quantities are brewed to make exporting the product feasible. If you'd like to try some Callwood Rum, you'll just have to visit Tortola and buy a bottle for yourself! 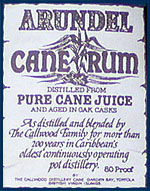 As distilled and blended by The Callwood Family for more than
200 years in Caribbean's oldest, continuously operating, pot distillery. 80 Proof.

The Callwood Distillery, Cane Garden Bay, Tortola, British Virgin Islands
The photo below was taken on the Ridge Road, Tortola, directly in front of the Arundel Villas. The land upon which the villas are situated were once part of the original Arundel Estate and included the distillery. 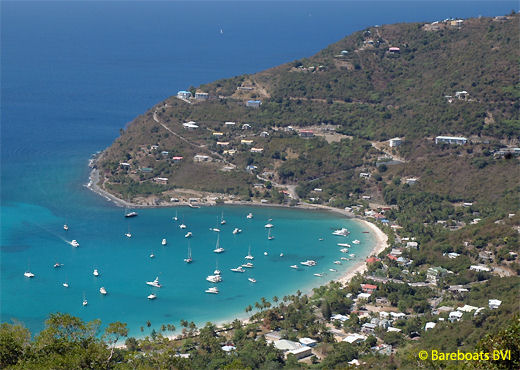 View of Cane Garden Bay
Michael is the 4th generation of Callwood's operating the business. His son, Michael Junior (Mikey) will be the 5th, should he decide to carry on the family tradition.

Here's a little known secret: If you ask nicely, you may be able to twist someone's arm to sell you a bottle of a their personal stock which is aged for ten years. It is a much darker rum and I am told it's a lot smoother.