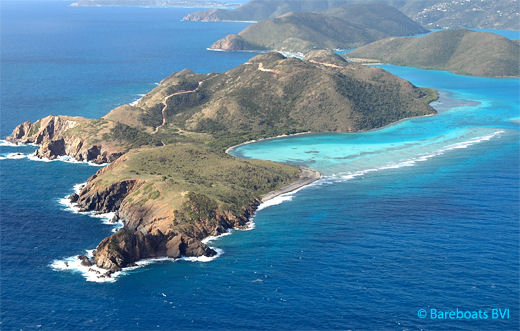 Oil Nut Bay Beach - Virgin Gorda
Once upon a time on an island not so far from where I live, there was a lovely bay with a lovely beach. Sailors, fishermen and people from all walks of life would often enjoy all that nature had to offer here. This fabulous bay with its amazing reef and spectacular view is called Oil Nut Bay.

The principal photo above was taken January 4, 2006, after the first road had been cut through to the valley area but before construction began for the exclusive, Oil Nut Bay Resort. To lend perspective to the photo, there's a tiny and barely perceptible white dot inside the bay, near the reef about a quarter of the way along the reef from shore, in the dark section. That tiny white dot is a 48' power boat. So as you might imagine, this is a sizeable bay.

Below is a closer view of the same photo and you can "just" see the yacht (anchored in sand) behind the reef, below the red arrow. On the far left hand side of the photo below the yellow arrow is a healthy salt pond and below the green arrow, all the natural vegetation lining the gorgeous beach.
Fast forward to March 14, 2011. Though still under construction, one can clearly see the transformation of the bay, the beach and the salt pond. 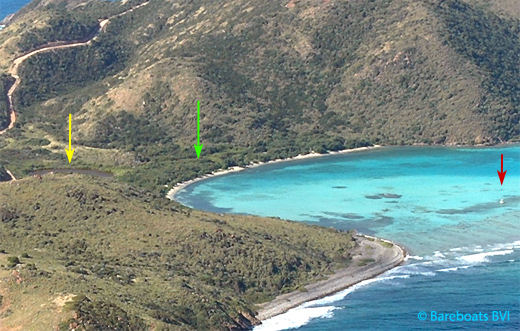 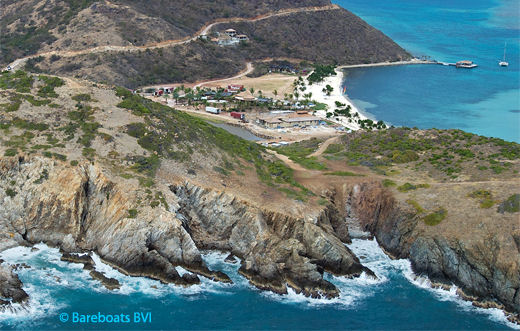 
Let me preface the following by stating that I am not what anyone would call a tree hugger, nor am I opposed to responsible, sustainable and ecologically sound development. As a non-belonger, I don't believe in getting involved in local politics, so this little protest is highly unusual for me.

As you can see in the following photo, gone is almost all of the coastal vegetation that once lined the beach, protecting the area from erosion. In its place are several palm trees (which are not indigenous to the Virgin Islands) ... a clearing with some sort of grass, many tons of imported sand ... and of course, several buildings. 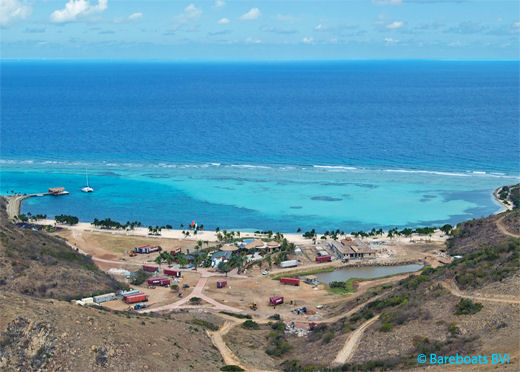 Alternate View in 2011
In addition and in order to accommodate the buildings, the Oil Nut Bay salt pond has been reshaped, resized and a partial rock wall has been installed on the shore side, presumably to lend a hard edge to the pond, allowing vehicles and pedestrians to pass. Please see our page on the importance of salt ponds.

There's no longer any natural growth or wetland surrounding the pond as the land has been filled in and leveled. No shorebirds are nesting here nor is any other wildlife using the salt pond for foraging purposes. It has been transformed into a catchment pool for run off from the surrounding hills. Unless chemicals are used regularly, it will likely become a marvelous fresh water breeding ground for mosquitoes as it can no longer be called a salt pond.

Without the surrounding wetlands, the pool has no means of draining and filtering itself naturally. Therefore, the developer installed an overflow culvert, located at the far northern end of the pond which serves as a drain. The culvert presumably runs directly out to sea. Over time, the catchment pond will likely fill with muddy sediment and may dry up between seasons. I would not be surprised if at some point, the resort management opts to install a cover over the pond.

There is a photo of Oil Nut Bay on Panoramio which has a wonderful view of the original salt pond. Click on the photo to see a larger version.

On August 8, 2013, there was quite a stir about the bay in a local online newspaper. The article in BVI News was titled:

A Virgin Gorda resident claimed that she was told by resort management that she couldn't anchor her boat in the sand.

By law, all beaches in the British Virgin Islands are supposed to be accessible to the public up to the high water mark. All other resorts in the territory provide access to the beaches, even though they have clearly demarcated swim areas. None of the others have roped off an entire beach let alone an entire bay!

The management of Oil Nut Bay claims that the designated swim area was demarcated by the Department of Conservation and Fisheries and that cabinet had approved it. But apparently, the "swim area" must extend to the entire bay because no motorized vessels other than fishermen and emergency vehicles are even permitted to enter the bay anymore.

In the article, an unnamed representative of Oil Nut Bay is quoted as saying: "Boat anchors can cause damage to ecologically sensitive seabed areas including coral reef, turtle grass and even sand flats, therefore, the Conservation and Fisheries Department discourages anchoring in this area". Even "sand flats" ... really?

The article goes on to say; "The Management and staff of Oil Nut Bay take great care to hold environmental integrity as a pillar of our development, " Oil Nut Bay declared."

I completely understand the issue of ensuring the safety of swimmers and agree that a reasonably sized safe zone should be established and demarcated by the resort in conjunction with Conservation and Fisheries .... but not to the exclusion of all residents and visiting boaters wishing to use the beach.

As to the claim that anchoring even in sand can cause damage to ecologically sensitive seabed area ... I would like to see scientific proof of this claim and IF true, I'd like to know what lead the Department of Conservation and Fisheries to arrive at this conclusion specific to Oil Nut Bay and nowhere else in the British Virgin Islands. Where is the study that drew this conclusion and on what date was the study carried out?

Mariners have been anchoring in sand for thousands of years (all over the globe) and they do so in all other areas of the BVI. What was found in Oil Nut Bay that makes it different?

Had the environment truly been of such great concern, the developer never would have been permitted to: Many people believe that the true intent behind denying access to the entire bay is purely to keep what "some" consider "undesirables" away from this high end resort.

Exclusivity has it's place. I get it, I really do. I even support it ... to a point. What I have a problem with is when laws, building codes or public policies are manipulated, circumvented or perverted to ultimately use them against the very people they were designed to protect.

In my opinion, making Oil Nut Bay and the beach inaccessible to the public by denying access to the bay and doing so in the name of ecology and/or safety, is a travesty.

I would very much like to see the Environmental Impact Assessment I'm sure must have been carried out prior to the Department of Conservation and Fisheries designating this entire bay off limits to all except emergency vehicles and fishermen.

Anyway ... the upshot is that if anyone other than resort guests and villa owners would like to use the beach, I suppose your only options are to parachute in or enter the bay via kayak, canoe or paddleboard. What a shame.