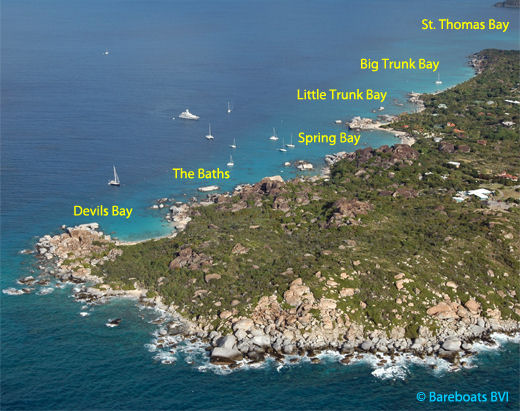 Virgin Gorda Beaches South
Virgin Gorda boasts a plethora of exquisite beaches ... particularly on the Western shore. From the southernmost point and all the way to the northern tip, the island has no shortage of places to relax, unwind and have some fun in the sun.

The southwestern part of the island is littered with stunningly beautiful, powdery white sand beaches, strewn with enormous boulders. The beaches are literally lined up one after another and each is special in it's own way. If one beach is too busy for your liking, there are plenty of others from which to choose.
There's no question that The Baths are a sight to behold and I visit there fairly often ... but, if I had to pick just one out of all the beaches on Virgin Gorda as my favourite, it would be Spring Bay. In fact, I suppose it's really my favourite of all the beaches in the BVI.

Just past St. Thomas Bay on your way north, you'll come upon Little Dix Bay beach and the lovely resort of the same name founded by Laurance Rockefeller in 1964's.

Next up is the little beach at Tetor Bay and a much larger one at Plum Tree Bay. Both are only accessible by dinghy or from land. Neither is pictured but I'll get around to it one of these days! According to a government map I have, there is a footpath to the beach at Tetor Bay. 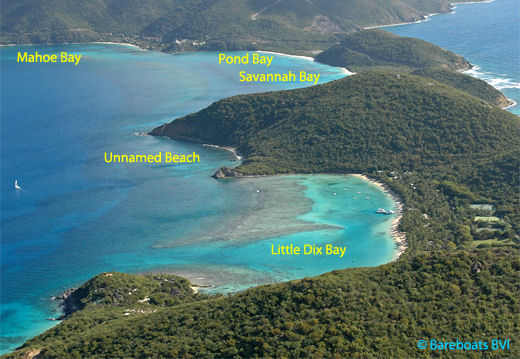 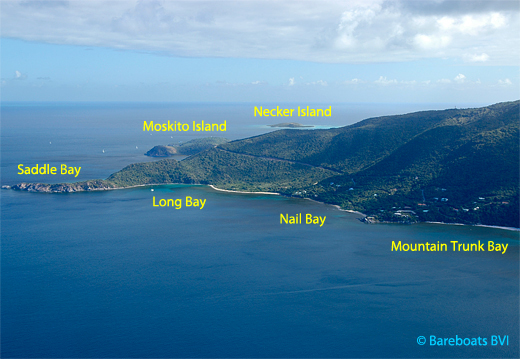 
As you round Mountain Point on your way to the North Sound (leaving Mosquito Island to starboard), you could easily miss seeing three nice little beaches tucked between Mountain Point and Anguilla Point. The first one (Saddle Bay), is directly behind the point. 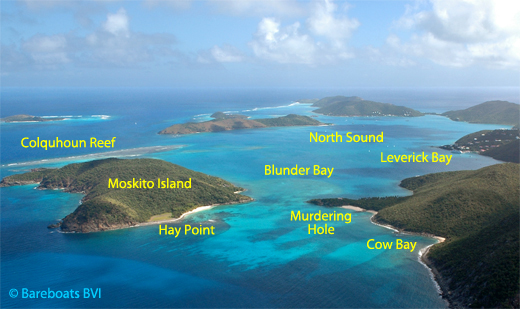 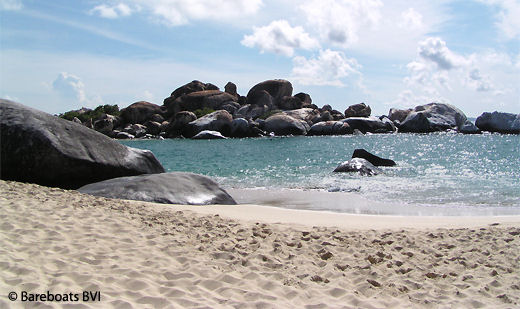 
The next two beaches are closer in to Anguilla Point. You may want to take a quick detour just to check them out, but for heaven's sake, don't try to pass through the narrows. The body of water located just past Anguilla Point is called "Blunder Bay" for very good reason. The reef has claimed more than one yacht that attempted to pass through here ... but there's great snorkeling in this area.

Within the North Sound, you'll find a few beaches on nearby Moskito and Prickly Pear islands as well as the little beach at Leverick Bay and a yet another at the Bitter End Yacht Club.

North of the North Sound

Sailing onwards through Eustatia Sound to the island's northern tip are two more exquisite beaches. The first is located at Deep Bay and the last is at Oil Nut Bay. Sadly, it appears the company that promotes YCCS Marina, Biras Creek Resort and Oil Nut Bay Resort, (Victor International) has done their best to make these two beaches exclusive to resort and marina guests only. Not sure how legal that is. In addition, it appears they have also managed to make the Oil Nut Bay anchorage inaccessible to ALL boat traffic. Very sad.

No matter how you cut it and despite the controversy in regards to the beaches in Deep Bay and Oil Nut Bay, it is an undisputed fact that Virgin Gorda has been blessed with some of the most splendidly scenic beaches on God's green Earth. AND, I have only covered those on the lee side of the island!