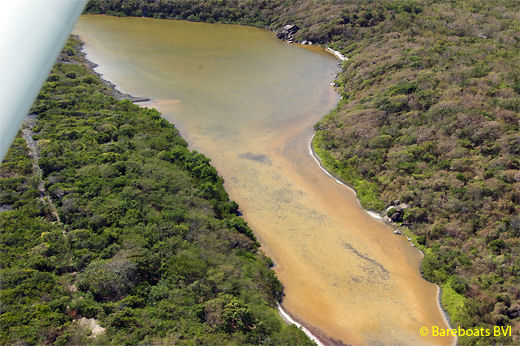 Salt Ponds & Mangrove Stands in the BVI
I'd like to state clearly that I have no education in the fields of marine or any other kind of biology, geology, ornithology, zoology or any "ology". I am what you might refer to as a recreational "mucker". I like to muck about, in and around salt ponds and mangrove stands. I find them fascinating. Some may think salt ponds are unattractive, but I consider them a thing of beauty.

It is a fact that coastlines are always changing. Natural erosion and deposit cycles take place due to changing weather and wave patterns, storm events, earthquakes, tsunamis, etc. All of these things influence and naturally alter shore lines. It is sometimes difficult to appreciate that these changes take place over time, sometimes very long periods of time and sometimes they occur very quickly.

In our quest to be as closely connected to water as possible, humans continue to build on coastlines, often too closely. Sadly, this is having an adverse affect on our environment and as a result, bit by bit, we are destroying the very thing we are drawn to. Due to a finite amount of Caribbean waterfront property, salt ponds and mangroves are disappearing at an alarming rate.
To my way of thinking, (remembering that I am just a recreational mucker) there are two types of salt ponds found throughout the British Virgin Islands. Old and young. Some are quite young in geological terms and others are centuries, perhaps thousands of years old. You can actually see salt ponds in various stages of development throughout the BVI.

There are those that are very close to the sea and are actually fed by the sea on a regular basis, through storm events and ground seepage. Some are slightly below sea level and the sea water wells up in them. They serve as a very important habitat for various birds and plant life, particularly mangroves and sea grape trees. Many also produce salt, others do not. 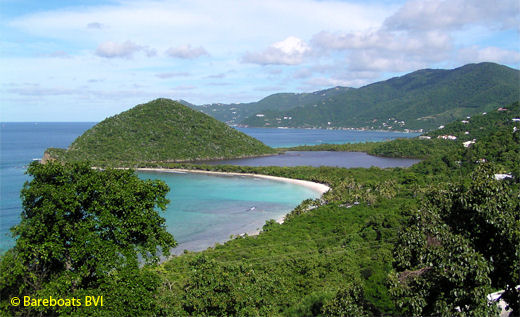 Belmont Salt Pond
There are some that are quite close to the sea but separated by land barriers, and although they also serve as a habitat for various bird and plant life, they serve mainly as a natural filtration system, keeping sludge and muck from running directly into the sea and killing nearby reefs. These are generally quite old ponds.

I know this is a rather simplistic explanation for a very complex part of the ecosystem ... but without salt ponds to protect them, many beaches would be inundated with sludge and muck washed down from the hills, the water would be very murky for a long time after every rain event and sea life around coastal areas would rapidly dwindle and eventually disappear due to sedimentation.

If anyone ever doubted the crucial function that Caribbean salt ponds provide, they need only go take a close up look at a healthy (and unmolested) salt pond such as the situated beside Smuggler's Cove, seen in the photo above.

Sadly, in some areas, salt ponds are under serious threat due to development. For instance, there used to be a salt pond at the point on Scrub Island. See photo below. See the yellow arrow? Yup ... that's a salt pond.

Who knew when I took that photo of the Scrub Island point in January, 2006 that the salt pond's days were numbered? Unfortunately, it simply disappeared when the resort was built in 2010.

It is now buried under part of the hotel block, as evidenced in the foreground of the photo below. This is a 230 acre island. I find it very sad that the builder was either unable or unwilling to work around the salt pond. With some careful nurturing and responsible grooming, it might have been turned into a natural feature that resort guests would enjoy. 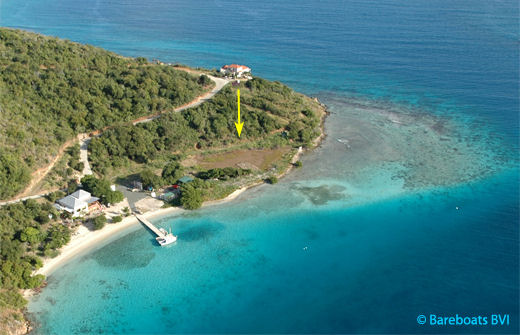 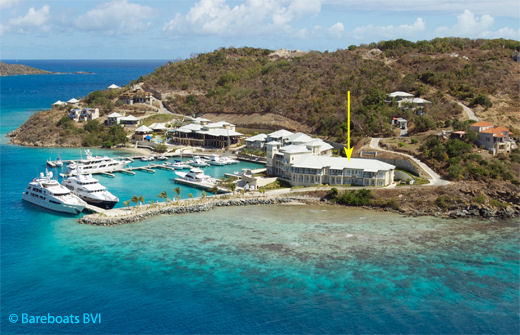 
Two of the BVI's most recently built resort developments have made claims (in writing) to be "committed to environmental integrity", or have stated that "extreme care has been taken in every aspect of development to ensure protection of the island's natural ecosystem". Really? Both developers destroyed what is likely the single most important part of their local ecosystems. Both of them destroyed salt ponds! How "committed" to the environment can they really be?

There are resort owners in the BVI, such as Sir Richard Branson who in fact is truly committed to environmental issues.

The Moskito Island salt ponds had been very badly abused by previous owners and used as a trash dump. Mr. Branson cleaned them up and restored the natural vegetation as well. They are now thriving with wild life.

Thankfully, Mr. Branson has a handle on what "environmental integrity" means. Rather than shrinking, reshaping and putting stone walls around the salt ponds or burying them altogether, Sir Richard has done everything in his power to restore the ponds on Moskito Island to their natural state so that all the waterfowl and other salt pond dependent critters may enjoy their environment without human interference.

These creatures were here long before us and it is my fervent hope that we don't manage to wipe them all out, one salt pond at a time for the sake of the almighty dollar and for what some people consider progress, and others find unsightly or inconvenient.

We really need to start thinking about the importance of the salt ponds! Whenever new "things" are built in the Caribbean, you can be sure salt ponds, animals, fish, birds and the environment in general suffer major damage as a result. We need to minimize the damage.

Environmental stewardship isn't some kind of marketing slogan to be trotted out by politicians and developers whenever it suits their purposes and ignored when it doesn't. With the destruction of every salt pond and mangrove stand, a little piece of the Caribbean and our planet suffers as a result.

While we are busy allowing the Caribbean salt ponds to be destroyed by developers, others are spending millions upon millions of dollars in restoring salt ponds and wetlands that have been lost to development as the negative impacts are now being felt.

Salt ponds are part and parcel of the Caribbean. If we were to relate them to the human body, salt ponds would be the liver.

Human beings cannot live without a liver or at least dialysis ... nor can the Caribbean live without salt ponds or a reasonable facsimile. Please stop bulldozing them, covering or altering them beyond any hope of serving the purpose for which they were intended.

While I'm at it, please stop denuding the natural growth around beach areas too! Particularly in regards to mangrove stands. They are the Earth's kidneys. Look up what functions both of these organs serve to better understand how critical salt ponds, mangroves and natural beach vegetation really is.

There are other resort owners such as Dr. Henry Jarecki, owner of both Guana and Norman Island, who for many years has taken great pains to see to it that he did not interfere with the ponds on his islands. But then there are others ... such as Oil Nut Bay.

Caribbean salt ponds are being lost at an alarming rate and the tragedy is that few people seem to care. Perhaps they are just unaware but it seems the most only care about the short term and if there is a long term affect on the environment ... oh well! There are a finite number of salt ponds, and the environment does have a breaking point.

So Mr. developer, before you classify any salt pond as an inconvenient eyesore, why don't you take some time to muck about in and around a healthy salt pond to see exactly what it is you are planning to destroy. Perhaps you might visit with Dr. Jarecki or Sir Richard Branson before firing up your bulldozer. With a little effort, perhaps you can turn that eyesore into an attraction! 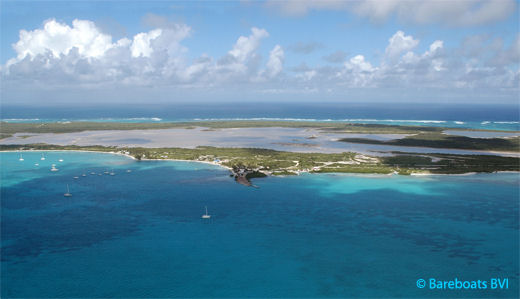 
I realize I am a nobody ... I have no influence over anyone and few if any care what I have to say. But if all the nobodies of the world would make some attempt to stop the wholesale destruction of salt ponds and mangrove stands, perhaps some of the somebodies would take notice and help put a stop to it!

Ok, I feel better now and I'll be putting my soap box away, for the time being. It was recently announced that a developer has taken an interest in a resort development on Anegada. More than 1/4 of the island (photo above) is covered in salt ponds. I wonder if any of them or any part of them will be deemed "inconvenient" or "unsightly"? Sigh.