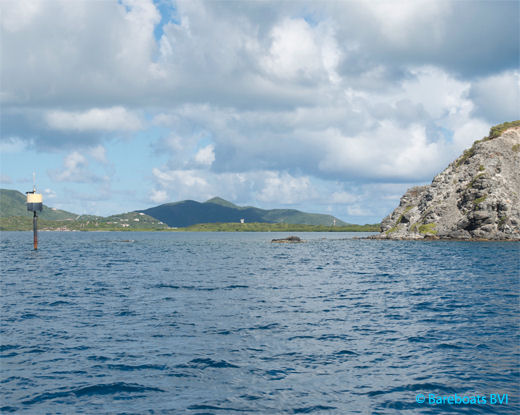 I used to think this group of rocks was called Whale Rock, as in singular ... but in fact there are three rocks and two of them are very hard to see as they barely break the surface. On a calm day such as was the case when I took the above photo, you can actually see two of them but even minimal wave action obscures the third.

On a day with two to three foot waves in the channel, you often can't see any of them. I'll try to get an aerial photo one of these days.

I heard a great story about these rocks. I have no idea if the story is true or not, but it's too funny to resist!

It seems that some fellows from the BVI Customs Department were "patrolling" (I don't know if it was night or day) and somehow hit these rocks, sinking their boat. When asked how on earth they managed to sink the boat, the captain replied, "We hit a whale!" ;)

I don't know if they were already named Whale Rocks or if this is how they came to be named ... but in any case, it makes for a good story. Thankfully, in recent years, following a very sad fatal accident, they have since been well marked.

There's pretty good snorkeling in this area and friends of mine and I once went lobster hunting here. We were planning a big party and the main dish was seafood Jambalaya. I was most impressed watching Bobby Gray catch a lobster with his bare hands! I failed miserably when I tried. Those critters are fast! :(