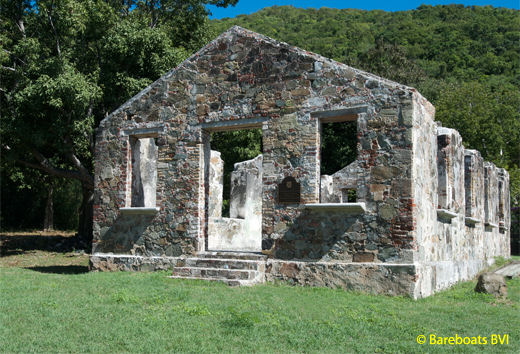 On March 25, 1807, the Slave Trade Act was passed into law at the house of Lords in London England. The vote was 283 in favour and only 16 against the abolishment of slavery. This was the first major step towards freedom for all slaves in the UK and all British Territories.

The act abolished the trade and/or sale of Africans ... but did not free those who were already enslaved. The emancipation act did not take place in the BVI until 1834, though several British slave owners did emancipate their slaves long before emancipation took place. One such abolitionist was Dr. John Coakley Lettsom, a Quaker born on Little Jost Van Dyke.
The slave trade was a very lucrative business and many tribal chiefs in Africa as well as the sea captains they dealt with, were not about to let a little thing like the law stand in their way of making easy money. They continued to sell human beings into slavery for several more years.

After the Slave Trade Act went into effect, several illegal slave ships were stopped by the British Navy and their cargo of would be slaves were commandeered and taken to Tortola. 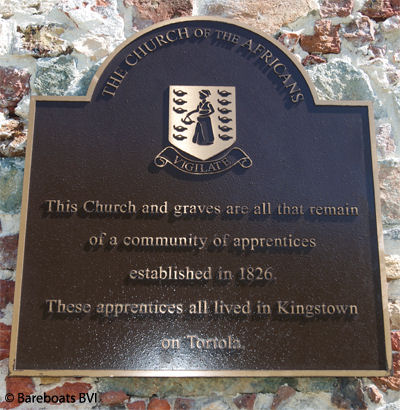 The Church's Historical Plaque
The details of this period in history and the destiny of the would be slaves may be found in Patricia G. Turnbull's book, "Can These Stones Talk?" which I believe should be mandatory reading for all school children and all expats living in the BVI. The destiny of those would be slaves is closely intertwined with this church.

When I first moved to Tortola, I lived in Kingstown in a tiny one bedroom, peach coloured house that sits on the hill just above St. Phillip's Church. The neighbourhood back then was very quiet and almost entirely undeveloped. I think there were only 4 or 5 small homes on the hill at the time and Cedar School did not yet exist.

I recall one fine sunny morning being startled awake by very loud and joyous singing which seemed to be coming from right outside my bedroom window. I stepped out onto the porch and sure enough, there were dozens of church goers at the ruin just below me.

I found out later that it was St. Phillip's Day and the congregation were singing their hearts out in remembrance of their ancestors. It spurred me to try to find out more about the ruin but was disappointed that there was very little information to be had ... until quite recently.
Back then, the ruin was in danger of crumbling to pieces as it appeared no effort had been made to preserve it. I remember being pleasantly surprised from time to time to discover that somebody or a group of some bodies had cleaned some of the growth off the structure and around the immediate area. Unattended structures can easily be swallowed whole by the aggressive trees and plants that thrive on the island.

Over the past 20 years or so, several bursts of activity have taken place and today, the Church is in much better condition than it was more than 20 years ago. I believe the BVI government put about $15,000.00 towards a recent restoration project. Magically, the dirt floor was replaced with a stone floor and an alter appeared out of nowhere. Each of the doors and windows had all of the growth and debris removed and new window sills, headers and door headers were fabricated and installed.

My guess is that the original church would have had a wooden floor, door, alter, shutters and window sills ... but I can certainly understand why the floor, alter and sills were replaced with stone and cement. Considering the church has no roof and there is no regular maintenance schedule, wood replacements wouldn't last very long. Termites and the elements would destroy them in no time at all.

So although it may not be 100% true to the original, at least the building hasn't deteriorated any further. It is wonderful to see a new generation coming along who may learn about and get a better understanding of the hardships their ancestors endured. 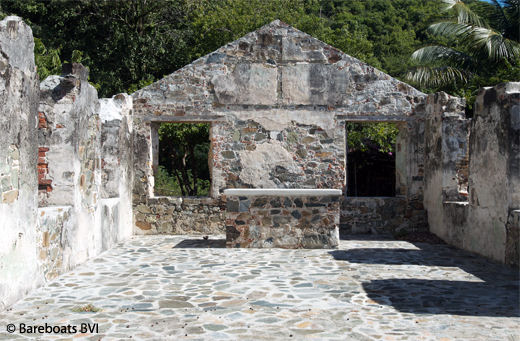 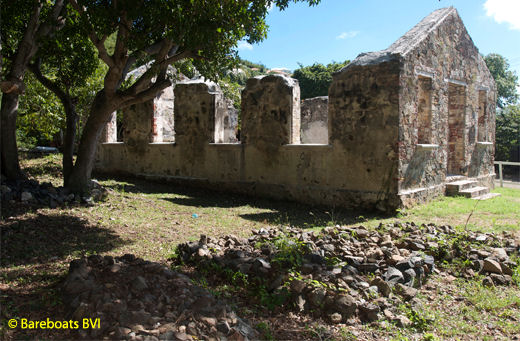 
It is still inconceivable to me that one human being could ... or would even want to "own" another. What's even more inconceivable, is the cruelty inflicted upon some of the slaves, not just by the British and other nationalities ... but by their own African people as well. Just imagine trading or selling your own people into slavery! It's all too sad to even ponder.

I regard this church as a symbol of hope and self determination for all British Virgin Islanders. The roots of freedom began, grew and spread from the door of this humble little church.

This is where the first free African people congregated, worshipped, prayed, sang, socialized and buried their dead. It is a place to be appreciated, celebrated and honoured.

It is heartwarming to see that this historically meaningful landmark is finally being treated with the care and reverence it so richly deserves.