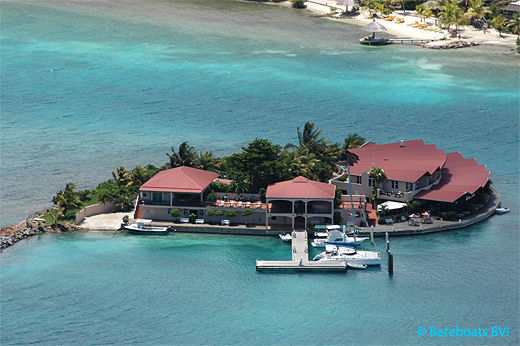 Saba Rock in the British Virgin Islands
It boggles the mind how the architect (the late Paul Wattley) was able to fit so much onto such a tiny little island, make it all work and still leave sufficient room for trees and shrubs and a lovely little beach where guests can relax, sunbathe and swim. Remarkable really.

In addition to 8 rooms for hotel guests, there are 10 slips for visiting boaters, a gift shop, a nautical museum and a lovely restaurant overlooking the North Sound. They also have 15 mooring balls maintained by Moor-Seacure and offer free ice and water for charter yachts using their facilities.

In 1970, at the age of 56 Bert Kilbride decided to sell nearby Moskito Island as he and his then wife, Menine, had parted ways. He also sold his company, Dive BVI. He then leased tiny Saba Rock and set about building a humble abode built from local stone, cedar shakes and driftwood he found on nearby beaches. Never one to sit still for very long, he soon established a new company called Kilbride's Underwater Tours.
In 1982, (at the age of 68) Bert met the lady who would become his fifth and last wife, Gayla. But life on Saba Rock didn't go quite as the couple had hoped. The island was so small, they were basically living in a fishbowl. The Bitter End Resort on Virgin Gorda (as evidenced in the photo below) that, despite it being a privately leased island, uninvited tourists kept swimming over and invading their peaceful existence.

When Bert was recounting his story about how the Pirate's Pub came to be, we were sitting at the bar at Village Cay in the early 1990's, while Gayla was off shopping. He said that rather than getting their knickers in a twist over the whole "tourist invasion situation", he decided to embrace and capitalize on it. That's how the well known, "Pirate's Pub" came to be. I think he said something about life, lemons and lemonade ... but I can't remember exactly.

Coincidentally, after hurricane Hugo blew through the BVI in 1989 the SCUBA diving market went soft for quite some time and Bert and Gayla were getting worried. The Pirate's Pub was one way to help supplement their income. The pub was a resounding success and you never knew who you might meet there. Celebrity sightings happened frequently. 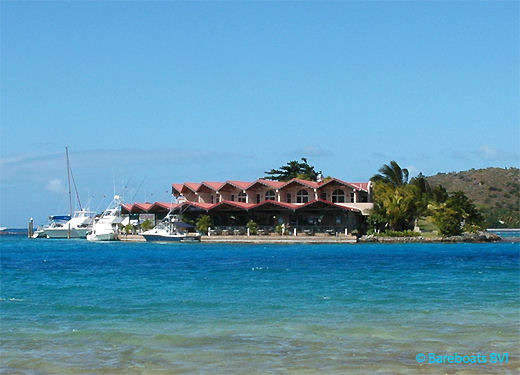 
The pub was a fabulous place for divers, sailors and anyone who had the means to get themselves out to the rock. The place was almost always busy and Bert was in his glory. He loved to tell his tales and he was without a doubt, one of the most fascinating people I ever met. I could listen to him for hours ... and did on on more than one occasion.

I recall one time in 1994, I had stopped into the Pirate's Pub for a late lunch. I was out on one of my solo tours. They weren't busy and Bert didn't think anyone should eat alone, so he sat down and joined me. He then proceeded to set his place using dinnerware and flatware he had found on the wreck of the Rhone. The man was a shameless show off! :)

At the end of our impromptu lunch, my stomach was killing me from laughing so hard that I was relieved to get in the dinghy and head back to Tortola. I couldn't have taken much more!

Sadly that was my last visit to the Pirate's Pub. In September 1995, hurricane's Luis and Marilyn did a lot of damage to the place and that was the end of it. Gayla and Bert boarded up the place and moved (briefly) to the condos beside Village Cay on Tortola before permanently moving to the U.S. Some fellow bought the lease and the pub ... that was that.

Today, Saba Rock is much different but Bert's presence can still be felt. They have a museum there and display several of Bert's treasures that he brought up from the deeps over the years.

The restaurant is lovely, the food is very good and the service is excellent. If you get there in time for happy hour (4:00 to 6:00), you can watch them feed the tarpon, a daily ritual at Saba Rock!