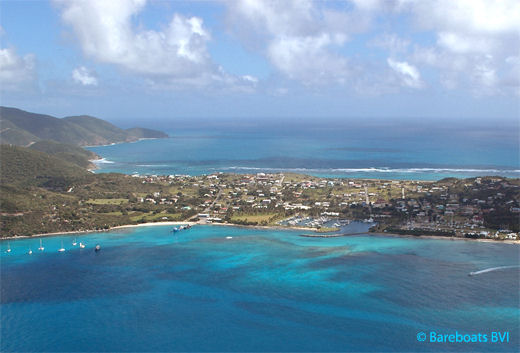 Spanish Town, a.k.a. The Valley, Virgin Gorda
There is evidence that Virgin Gorda was first inhabited by Taino, Igneri (aka Arawaks) and Carib Indians dating back many centuries. The exact time of their presence on the island is disputed and a subject of scholarly debate. Some claim it was as early as 900 BC.

Christopher Columbus stumbled upon the island in 1493, on his second voyage and apparently thought the island looked like a fat woman in repose, he named the island Virgin Gorda, meaning "The Fat Virgin". The island was virtually ignored for more than two centuries. According to history books, the Spanish never made any serious attempt to settle the island. But that gives rise to the question of how Spanish Town got its name?

Some claim the Spanish did indeed settle on Virgin Gorda (however briefly) and that it was they who drilled the first shaft at the Copper Mine. However, I have been unable to find any kind of solid information to back up that claim. Yet, the name of the town would suggest that Spaniards did settle here at some point, before the Dutch or the English. I guess I'll have to do a lot more research!

It is known that Sir Francis Drake first visited Virgin Gorda in 1585, anchoring in the North Sound. But it wasn't until 1672 that the British wrestled away possession of the islands from the Dutch.

Spanish Town is often referred to as "The Valley" by locals and it is the second largest town in the British Virgin Islands.

The relatively small area between the South Valley and Cow Hill to the north, is the only flat ground (not strewn with massive boulders) on the whole island. For that reason, it is much more heavily populated than any other area.

Spanish Town was (very briefly) the capital of the British Virgin Islands until 1742, when it was relocated to Road Town, Tortola. The town is centered around the jetty in St. Thomas Bay and the Virgin Gorda Yacht Harbour.

For a brief period in history, sugar cane and cotton plantations dotted the hillsides of Virgin Gorda. However, with the abolishment of slavery in 1834, planters were faced with financial ruin and all of the plantations were eventually abandoned. Former slaves were also abandoned and left to fend for themselves. Many migrated to Tortola in search of work, while some managed to put their skills to work and were able to eek out a meager living by fishing, raising livestock and growing their own vegetables.

In 1837 (or thereabouts), there was a glimmer of hope for the newly freed slaves when the Virgin Gorda Mining Company was established and the Copper Mine began operations. Unfortunately, the mine closed in 1841 due to the plummeting price of copper in Europe and again, the people were left to fend for themselves.

About 18 to 20 years later, a new company arrived to start up mining operations. The company employed upwards of 140 to 150 local men, which gave many of them a year or two of steady income with which to build homes, etc. Having depleted the majority of the copper ore, mining operations came to an end in 1862 and the Cornish miners and their families left the island.

For a third time in less than 30 years, the people were abandoned, with no prospects for gainful employment. For more than one hundred years, no industry (of substance) existed on Virgin Gorda other than what the people managed to create for themselves.

Life was not easy and the local people lived through a great many trials, including a cholera outbreak in 1853. Many of the men were forced to migrate outside of the territory to look for work so they could send money back home to support their families.

It wasn't until 1964 when Laurance Rockefeller opened the 500 acre, Little Dix Bay Resort in Spanish Town, that residents would finally be offered employment and economic stability. I guess one could say that Rockefeller started the "green" movement as Little Dix Bay Resort is what many might be described as the first "eco resort", before it became fashionable to use the term as a marketing tool.

In my opinion, the foundation for today's tourism product (throughout the BVI) was laid by three people who pioneered tourism in the territory. Laurance Rockefeller kicked off the whole thing when he opened the resort in 1964, followed by Charlie and Ginny Cary who founded The Moorings in 1969 on Tortola, followed in 1975 by Henri & Gloria Jarecki owners of both Guana Island and Norman Island.

The influence of all three of these families is palpable throughout the islands and many of their conservation efforts have ignited additional efforts by the likes of Sir Richard Branson, owner of Necker Island as well as others throughout the territory. Local conservationists are now following suit and making serious efforts to help educate others to the need to protect and preserve the BVI environment for future generations. And it all started right here in Spanish Town!