The Copper Mine Ruins, Virgin Gorda 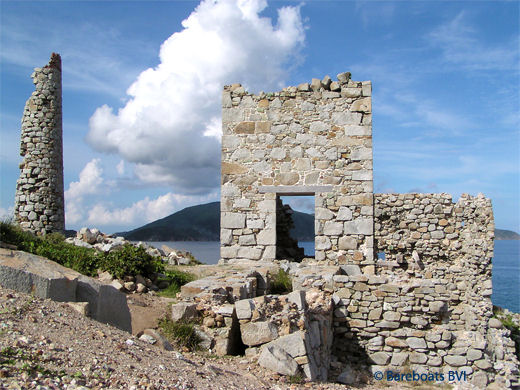 The Copper Mine National Park
The ruins are located on Mine Hill on the southeastern point of Virgin Gorda. This site was declared a BVI National Park on March 28, 2003. To commemorate the event, the honourable Ralph T. O'Neal, then Chief Minister, and several other government dignitaries revealed a lovely plaque, set in local stone found on the site.

In the principal photo, you can see the two stone walls extending straight out from the door. These walls formed the wheel pit where the fly wheel was once mounted. The one wall on the right has collapsed onto the other. Interestingly, it collapsed inwards rather than downhill.

There are conflicting reports stating that the most modern mining operation, owned by the Virgin Gorda Mining Company, was established in 1837 and the original shaft was sunk in 1838. Another states it wasn't built until 1839. Nevertheless, after having extracted a good amount of copper from the mine, the company folded in 1841 due to falling copper prices in England, making the operation unprofitable.

Some 18 or 20 years later, a company named John Davies and Sons reestablished operations. They were responsible for building the engine house and chimney stack (seen in the principal photo) and was certainly the more successful of the two companies.
Approximately 36 miners from Cornwall, England worked tirelessly at this site with the indispensable aid of some 140 to 150 BVI workmen. The mine was finally abandoned sometime around 1862 and has stood as testament to these industrious men ever since.

The shaft was driven by a coal powered, steam engine of Cornish design known as a Beam Engine. The miners extracted the precious ore and shipped it back to South Wales. They would return with provisions, wood for construction, pay for the workers and coal with which to power the steam engine. Records reveal that by 1860 (or thereabouts), the shaft had reached a depth of 240 feet below sea level. 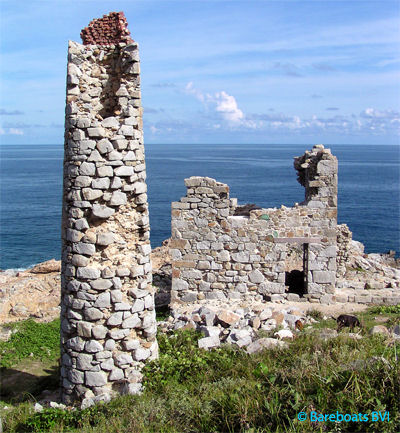 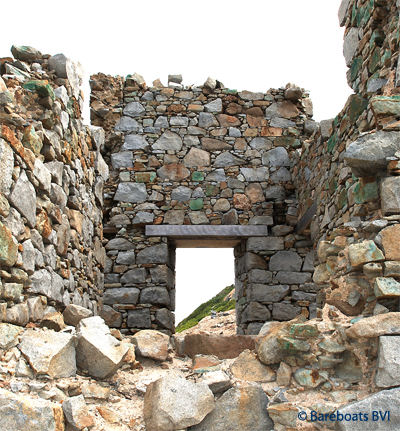 Inside the Engine House


As you can see in the photo above, verdigris or copper oxide is apparent on many of the rock faces, revealing the presence of copper in the stone.

Parts of the original stack, the engine house, a deep well (or cistern) and remnants of the metal boiler, are all that remain. The Copper Mine Committee in cooperation with the National Parks Trust, have undertaken to reconstruct this site using the footprint of the buildings and plans developed by archaeologists familiar with the work of the miners from Cornwall and their engineers.

Sadly, funding has been very scarce and little has been done to preserve or maintain the ruins since 2003 ... or thereabouts. The area is very exposed and subjected to all kinds of weather, including hurricanes, so how long they can last is anyone's guess. 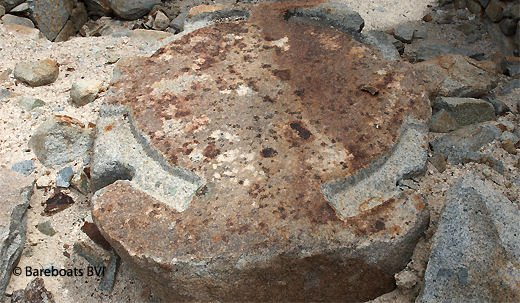 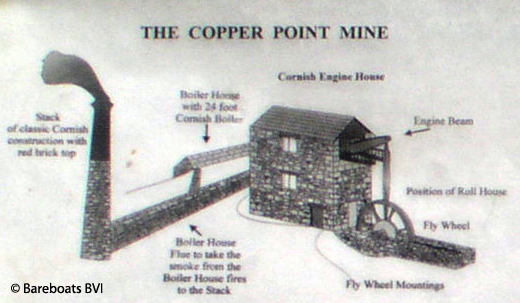 
I believe the chiseled rock (above), located inside the engine house, is where the steam engine sat. The engine powered the beam, which in turn powered the fly wheel that pumped the water up and out of the mine.

I imagine the stone would have been chiseled like that to perform as an engine mount to lock the engine in place and stop it from moving. I'm sure there would have been a lot of vibration caused by the movement of the beam.

Note: If I've made any inaccurate assumptions, please let me know so that I may make corrections. Trying to piece things together with very little information is somewhat difficult. I have little to no knowledge of mining and I have been unable to find information anywhere relating to the various parts that would have been at this site other than the diagram I photographed in 2004 above. The rather weathered diagram was once tacked onto a wooden board at the Copper Mine site, but has since disappeared.

I found information for a very similar (in tact) engine house located in Prestongrange, Scotland driven by the same type of beam engine. There are several coal, tin and copper mines of very similar construction that utilize the beam engine still standing, throughout various parts of the U.K.

To give you an idea of how the Beam Engine worked, I found a video online of a similar but much smaller beam engine built in England in 1832. See it in operation here. 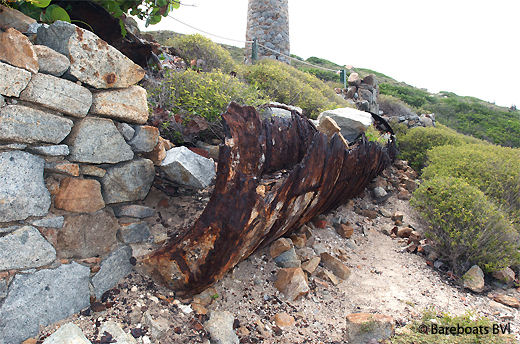 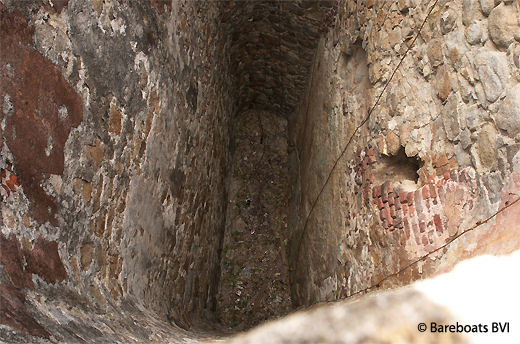 
The remnants of a double walled, metal tank (above) are what I assume was the boiler that would have been fully encased in rock as depicted in the drawing. The drawing notes that it was 24' in length but I don't know what its circumference would have been. It's big though, perhaps 6' around. Some of it is buried in rubble, so its hard to say without measuring it.

Unfortunately, I don't know enough about mining to know what this well (above) was for, but I am assuming it was likely a fresh water cistern. The workers would have needed a good supply of fresh water to make it through the work day and I'm sure it was used for other purposes associated with the mining operation. It appears the interior was once fully plastered as well. 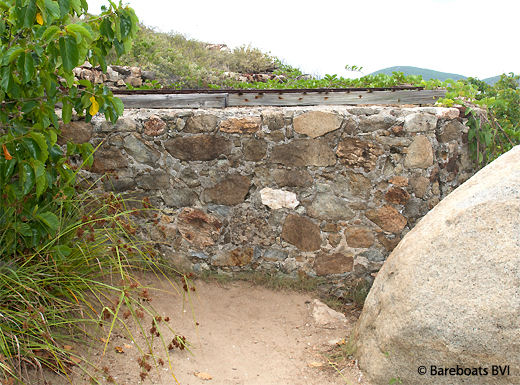 Copper Mine Ruins Cistern or Well 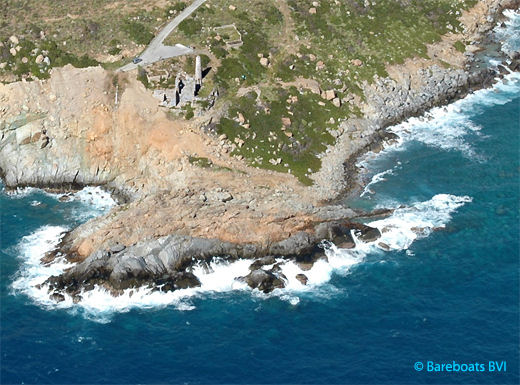 
This is what the well looks like from the side. A rebar grid set in a wooden frame has been placed across the top, presumably for safety reasons. It's located just east of the parking lot and is visible in the aerial photo above ... if you squint.

To this day, you can still see the rich veins of copper that attracted the miners to this ruggedly beautiful point and its spectacular views of the Sir Francis Drake Channel.

The road leading to this historic site was originally built by the miners, allowing them to haul their ore to Spanish Town for shipment to South Wales. Along the road, visitors will see a great view of Fallen Jerusalem.