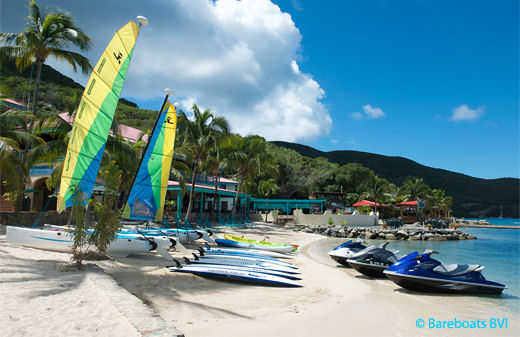 Blue Rush Water Sports - Virgin Gorda
I have an affinity for the underdog and am a sucker for a success story built on dreams. This story starts in 2012 when cousins Trevor Walters (then 25 and fresh out of college) and Josh Wheatley (then 23) wanted to start a water sports company in the North Sound.

Like many young men just starting out in life, Trevor and Josh had the concept, the energy and the "can do" attitude ... but very little else.

While Trevor was going to college in Daytona Beach, he'd save every penny he could while working summer jobs and odd jobs here and there. Meanwhile, Josh was working for family at a local construction company. Both were saving as much as they could and between the two of them, they managed to save enough to buy their first two jet skis. Blue Rush Water Sports became a reality in 2012.

They began their operation using a floating dock based at Vixen Point on Prickly Pear Island. It was an arduous set up as they had to take their jet skis back and forth to Gun Creek each night, load them on trailers and store them in the boat yard by Buck's Market each night. It was a physically grueling ritual for the cousins. Happily, the owner of the yard (Mr. Farrington) gave the boys a break and did not charge them a penny for storage.
However, Trevor and Josh soon realized that two jet skis does not a company make. There was no way they could generate enough income to sustain one person, let alone two!

Not willing to give up their dream, the young men decided they needed more jet skis and a portable docking system that would allow them to leave the jet skis in the water rather than hauling them out every night.

To this end, Trevor got a job with the BVI Tourist Board and Josh, who was now working at Leverick Bay Resort, both continued to save as much as they possibly could as quickly as they could.

After about 6 months of slogging away, the young men agreed that living expenses made saving money very, very difficult. It would take too long to save enough to buy the additional jet skis and the docking system they so desperately needed.

They tried approaching various banks for a loan ... but to no avail. With no assets as collateral or any previous business experience the banks simply weren't interested. They then hoped that a kindly benefactor might loan them the money, and they thought they had found one nearby ... but that process was taking too long. They needed the money NOW! 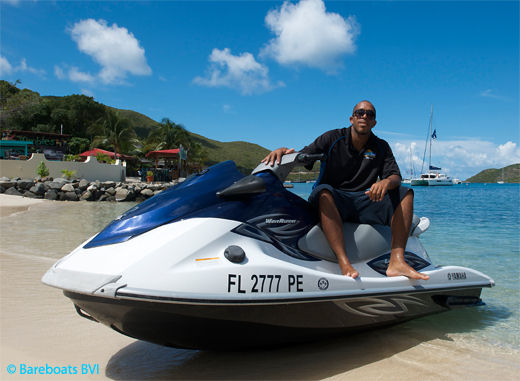 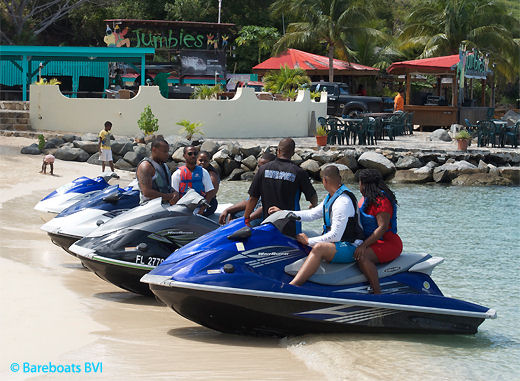 
In desperation, Trevor (seen in the photo above) approached his pastor and finally found the right person with enough faith in these young men to take a chance on them. The kindly pastor loaned them $5,000.00 and yet another cousin came up with a smaller loan. With what the two young entrepreneurs were able to scrape up and the loans from the pastor and their cousin, they were finally able to buy 2 additional jets skis ... and Blue Rush Water Sports was finally on it's journey to success.

Trevor flew to Florida and struck a deal for the two additional jet skis and docking system. With 4 jets skis, they were soon able to pay back their loans and proceeded to put all their profits back into the company to grow their inventory.

The next "must have" item on the fledgling company's list was a brand new Hobie Cat. Once they achieved that goal, people started asking for various other water toys such as stand up paddle boards, kayaks, and more.

In a very short period of time, the boys have managed to expand their fleet to include 5 jet skis, 3 Hobie Cats, 8 stand up paddle boards, 8 kayaks and they are planning to add some fly boards in the near future, which should prove to be pretty exciting.

They have also struck a deal and are now offering LED illuminated kayaks so that customers at Cocomaya Restaurant can enjoy a little nighttime paddling on the reef in front of the restaurant. They are also planning on adding some clear bottom kayaks sometime soon.

In the meantime, neither partner is drawing a salary as they have chosen inventory growth and personal sacrifice over immediate gratification. These boys are not just good looking, they're smart too! :) 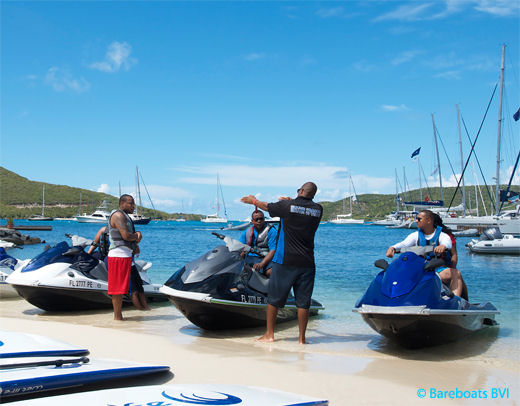 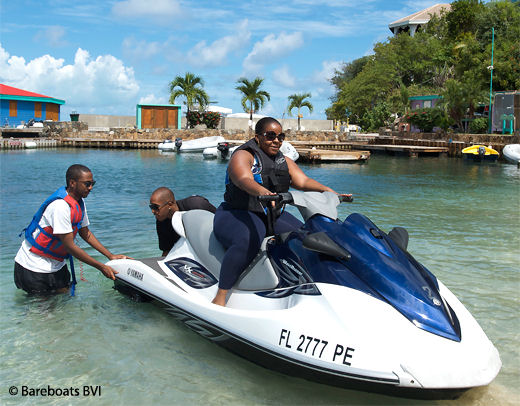 
In the photo above, Trevor is seen giving some clients instructions on where they may and may not go, and informing them that they must stay 300 feet away from any yacht, dinghy other jet skis and land.

As we all know, many sailors have a built in disdain for jet skis ... whether rational or not. Inevitably, people complain about the noise, the inherent dangers and that old chestnut ... the "nuisance factor".

I don't want to come across as preachy, but there are five points I would like to make in defense of jet skis ... at least these particular jet skis, operated by this particular company.

Firstly, the Wave Runners are all 4 stroke engines and are much quieter than all dinghies with 2 stroke outboard engines. So that shoots down the noise factor complaint. In fact, they are so quiet that most people don't even notice them when they come into the harbour. I know because I have witnessed people not noticing them on several occassions. 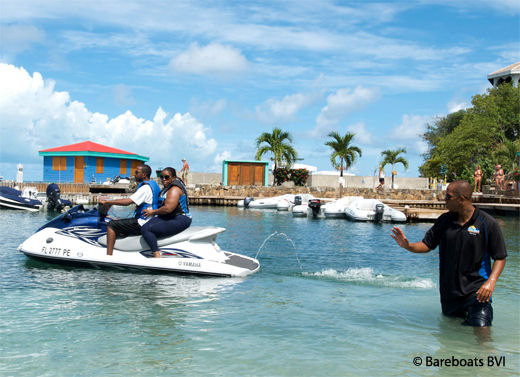 Sound Advice for The Lessee 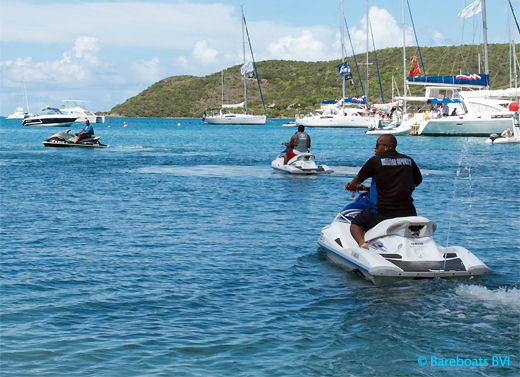 Adhering to the 5 MPH law


Secondly, jet skis (like dinghies) are only as dangerous as the people driving them. Much like the bad rap that motorcycles and scooters get, if driven by unsupervised riders with no rules imposed, they can in fact be quite dangerous. The difference here is that these jet skis are not unsupervised and very strict rules apply to their rental and operation within the North Sound. They also have governors on each of them and cannot be driven over 35 mph. 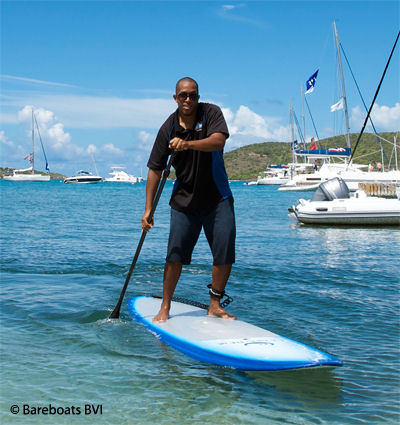 Fourthly, I will challenge anyone to provide proof of any "nuisance" factor the jet skis operated by Blue Rush Water Sports present. Trevor & Josh take safety and respectful use of the North Sound very seriously. I have witnessed no abuse of privileges whatsoever. In fact, I endorse them 100% and congratulate them on their mature and safe handling of these watercraft.

Fifthly, these vehicles do not have propellers, and by law, all riders are required to wear a life jacket and have the dead man's lanyard attached to their wrist. I will go out on a limb and state that in my opinion and provided they are operated properly, jet skis are several times safer than any motorized dinghy, where occupants are not required to wear a life jacket, nor are they required by law to use the dead man's lanyard provided on all modern dinghies.

Having said all that, it's really OK if you still don't approve of jet skis. Perhaps a paddleboard or kayak is more your speed! Trevor and Josh offer those as well! :)