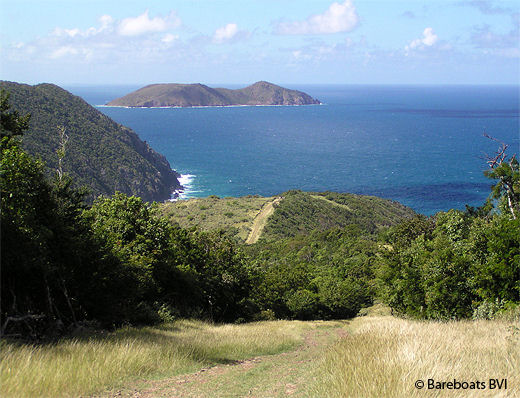 Great Tobago Cay - National Park
Located at latitude 18° 26' 22.09" N and longitude 64° 49' 25.98" W. (center of the southern shore) and about 6 miles from Jost Van Dyke, Great Tobago Cay and the waters surrounding it are probably one of the most pristine areas in the entire Caribbean. The reason for this is because until quite recently, almost nobody visited.

I should say that few people visited on purpose. I knew a fellow who got stranded here overnight once when his boat broke down and he drifted onto the rocks. He spent the entire night trying to prevent damage to his boat. It wasn't until morning that he realized he had simply run out of gas. He had a spare tank aboard, so he was off at first light. Duh!

Nowadays, Colin Aldridge of nearby Jost Van Dyke Scuba offers eco tours and and diving excursions out here when the weather cooperates.

A friend and I went diving here back in July of 1994. I've done a fair amount of diving since being certified in 1977 and I can honestly say I have never seen anything like it ... before or since. We spent the entire day here.
Another friend, an ornithologist from the U.S., was actually the reason the three of us decided to head out this way. Frank wanted to investigated the island as he knew Great Tobago is the Caribbean's third largest nesting grounds for sea birds and a sanctuary for Pelicans, Laughing Gulls, Tropic Birds and of course, the Magnificent Frigatebird a.k.a., Man o'war.

We managed to hit the ideal day. The sea was dead calm, the sun was shining, I was a lot younger and in the mood for an adventure.

We found a safe spot to secure the dinghy on the south side of Great Tobago. Frank headed up the rather steep embankment while we decided to go snorkeling first to see what we could see. I was blown away! Almost immediately, we saw large pelagic fish passing below us. 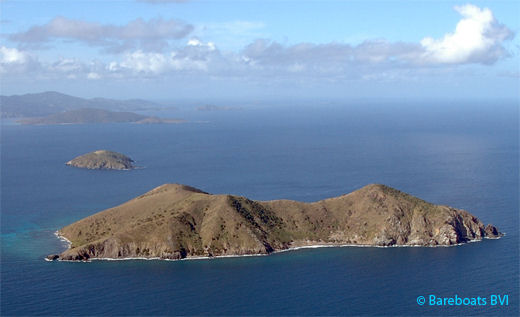 Second Aerial View of both Islands


After snorkeling for the better part of two hours, we headed back to the dinghy, had a quick snack, warmed up a little and then grabbed our scuba gear. At 50' it was like watching a parade. A blue spotted eagle ray here, a nice Wahoo there, several tarpon and a Loggerhead turtle swam right over me, so close that I could feel the water thrust from its fins in my hair. Then we saw a huge Reef shark which was being closely followed by two large jacks of some sort. It was amazing. They just kept coming!

The crowning glory of the day was spotting a swordfish that was substantially bigger than me! I had never seen one that wasn't hung on somebody's wall ... and was amazed to see one here. I thought it was too shallow for them, but apparently not for this one. It was a magnificent sight to behold. It wasn't even bothered by our presence, which quite surprised me. We were a bit of a curiosity for it, I suppose, so it hung around for a few minutes and then was off, I am guessing to find deeper waters. Having never been near one before, I didn't know if I should be frightened or not. I chose not to be.

I was disappointed that we had each only brought one tank and vowed I would come back "someday". Sadly, I've never gotten around to it.

Frank was ecstatic and as giddy as a little kid on Christmas day as we all piled into the boat to head back to Tortola. He'd discovered more than he could have hoped for and while I drove the dinghy, he was busy writing notes in his little book. He didn't stop smiling the whole way back. I wish I had asked him for copies of his photos. Sadly, he passed away just two months later.

Note to any sailors planning to visit: The noise from the birds can be almost deafening and the aroma on the island was somewhat overwhelming for me. Frank didn't seem to notice or care ... nor did my other friend. I don't know how Frank managed it, but I couldn't have spent a whole day above water here. An hour topsides was plenty in my opinion!

I've never set foot on Little Tobago Cay, seen on the far left of the photo above, so can't offer any first hand knowledge about it. Both Great Tobago and Little Tobago are part of the BVI National Parks Trust system and are protected wildlife areas. Little Tobago's claim to fame is that it is the westernmost island within the British Virgin Islands chain. 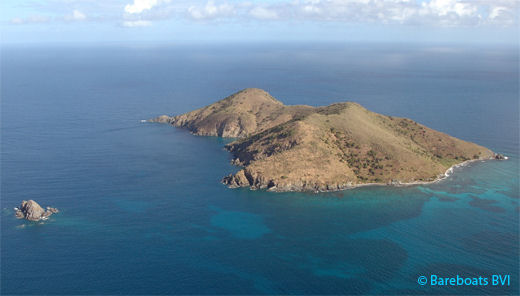 Watson Rock on the Left

Located at latitude 18° 26' 20.04" N and longitude 64° 50' 1.21" W, Watson Rock (a.k.a. Cable Rock on some charts) lies about 1/3 of the distance between Great Tobago and Little Tobago Cay and can be seen in the bottom left side of the photo above. Never been there either, so I can't say much, but it is also part of the National Parks system.