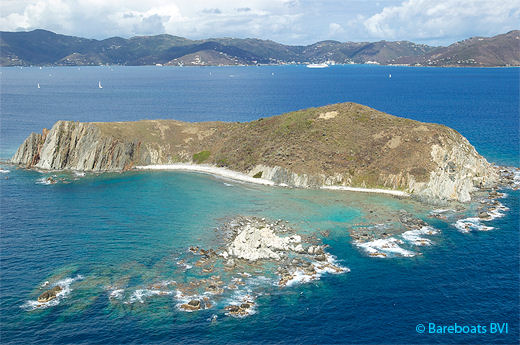 Dead Chest Island in the BVI
Located about a half a mile north east of Peter Island, lies an imposing and desolate island looming high up out of the water. The island is approximately 3/4 of an acre in size and consists of volcanic rock, meager and often parched vegetation and two narrow beaches on both the north and south sides.

Apart from perhaps Alcatraz, I don't think there is a less inviting place anywhere on the planet. Alcatraz at least has trees and flowers, Dead Chest Island does not. What little plant life exists here, is scrub brush and cacti. The only living creatures on the island are geckos, lizards, the occasional sea bird and a few harmless snakes.

Oddly enough, even a barren and desolate place such as this, has something to offer sailors from around the world. There are several dive and snorkel sites in the immediate area. Painted Walls, Blonde Rock and Coral Garden. For more information and to arrange tours, contact any of the SCUBA companies. Paradise Watersports on Peter Island and Sail Caribbean Divers on Cooper Island are the two closest.
Notorious pirate, Edward Thatch, a.k.a. Blackbeard, sailed the British Virgin Islands and made his home in Soper's Hole between 1715 and 1718. 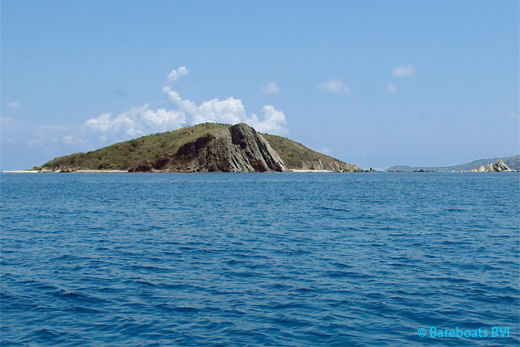 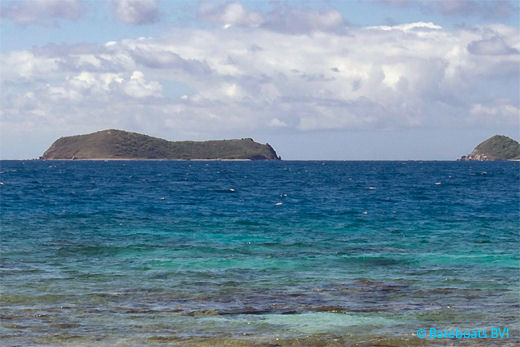 Side View of Dead Chest Island

I've heard the same story with two very different endings. Nobody knows what actually took place, if anything ... but according to local folklore, when faced with an unhappy and mutinous crew, Blackbeard concocted a devious plan to remind his crew who was boss.

After promising them all a feast on Dead Chest Island, he sent 15 of his most dissatisfied men ashore, each with a cutlass and a bottle of rum. They were to prepare an area for their BBQ. Blackbeard then hauled anchor and left them stranded.

The first story ends with the bones of 14 men being found on the island years later. The bones of the 15th man were discovered on Peter Island at the beach named in his honour, Dead Man's Bay. He had apparently tried to swim, but failed.

In the second version, Blackbeard returned some 30 days later and was surprised to find them all alive. He had hoped they would kill each other. Whether or not he took them aboard again; your guess is as good as mine.

Aside: If either version of this story is true, Blackbeard's men had to be pretty dumb or at the very least, pretty drunk to believe that their mangy faced captain was planning a feast on this anything but comfortable island ... considering Peter Island is a stones throw away! Had I been one of his crew, I think I would have passed on the meal prep plans. I certainly wouldn't have gone ashore until Blackbeard himself did, and even then, I would have been the last one off the rowboat.

In 1883, no less than 165 years after Blackbeard roamed the BVI, Robert Louis Stevenson wrote his famous adventure novel, "Treasure Island". The book is about pirates, treasure maps, mutiny and fascinating characters such as Jim Hawkins, Long John Silver, Billy Bones, Squire Trelawney, Pew and many more.

To understand the connection between the novel and the British Virgin Islands, you really should read the book. It isn't difficult to make the connection between real life pirates, and Stevenson's fictional pirate, Captain J. Flint. Flint is dead before the yarn spun in the novel begins, but he is a major part of the back story, around which the tale is centered. And as it turns out, Treasure Island may not be such a tall tale after all!

Here's a hint: In the novel, Stevenson wrote the beginning of a sea shanty:

He never finished the song and left the rest up to the reader's imagination.

In 1994, as an homage to Stevenson's death 100 years prior, author, journalist, sailor and adventurer, Quentin Van Marle, chose to stay on Dead Chest for 31 days. Blackbeard's men (if they lived) supposedly stayed there for 30 days.

Amazingly, Mr. Van Marle accomplished his goal. He wrote of his adventure (never to be repeated) in his novel, "Marooned - One Man's Ordeal On Dead Man's Chest". If you can find a copy at a reasonable price, it's an interesting read, though the man was clearly a loon for making such an attempt! A friend of mine loaned me a copy of the book and I quite enjoyed it. Sadly, Mr. Van Marle passed away on April 18, 2012 at the age of 66. 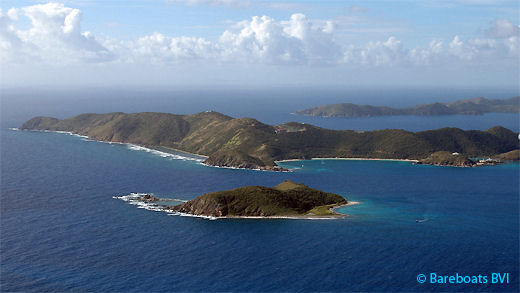