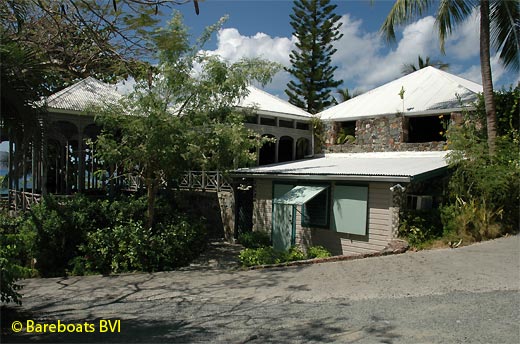 
The restaurant was built on the site of the boiling house of what was once the Appleby Plantation, from which the name "Apple Bay" is derived. The mill is purportedly one of the oldest and perhaps "the" oldest on Tortola, claiming to be more than 350 years old.

The building was painstakingly rebuilt and refurbished to accommodate this upscale eatery owned by journalists Jeff and Jinx Morgan. The couple bought the property in 1982 from the Cushings, an American family who built the original 21 room hotel in the 1960's, during the first wave of tourism development in the British Virgin Islands.

Behind the breakfast area, is the very romantic main dining room, where dinner is served.

Not too long after the Morgan's bought the property, the journalists added the restaurant along with 2 additional hotel rooms. It should be noted that both Jeff and Jinx wrote for Bon Appetit magazine for the better part of 30 years.

The Morgan's interest in the culinary arts is very deep seated and spans several decades. The restaurant has won several awards over the years.

Jinx is also a very accomplished artist and as such, aesthetics play a big roll in everything she does. Several of her water colours adorn the walls of the restaurant.

One of the original copper boiling pots (referred to as a copper and seen in this photo) still remains and takes center stage in the restaurant where the wood fired ovens used to be.

There would have been 4 or 5 coppers in-line, taking up the entire width of the boiling house. This is where the raw sugar cane juice would be reduced to molasses. Slaves would laddle out the juice from one pot to the next as the liquid slowly thickened.

Today, the space which once accommodated several coppers is inhabited by a small pond surrounding the one remaining copper and an indoor garden. My guess is that the copper seen in the photo above would have been the first in line as it is quite large. The rest of the coppers would have been smaller as the fluid reduced.

What is now the restaurant seating area would have served as a drying area where the coppers would eventually be moved and lined up for cooling and further air drying. Once ready, the molasses would then be transferred into wooden casks prior to shipment to far off lands for the purpose of rum making or for making their own rum on the premises.

The restaurant's dinner menu changes nightly. Based on personal experience, everything offered is very good to excellent. All menus are à la carte and include appetizers, salads and entrees with a wine selections to compliment the meals offered.

It's tough to choose just one drink, as they all sound fabulous, but aside from the obligatory painkiller, their most popular mixed drink is their signature "swashbuckler". This is a mix of house rum, mango purée, a whisper of Coco Lopez, a hint of raspberry cream and topped with whipped cream.

You'll find the management and wait staff to be friendly, attentive and very quick by Tortola standards. I can honestly say that I am always impressed by the service here!

Important Note - Under New Ownership
Since the above info was written, the restaurant was sold in the fall of 2015. I have been unable to contact the new owners to update the information as staff have told me that "they aren't ready yet". I have no idea if the information above is still accurate or not but I will do my best to find out sometime in the new year if/when I have time to visit.

From what I have heard, the improvements made so far are pretty wonderful and the new owners are doing their best to make the place more accessible to the average traveler. Not sure how they would feel about yachties arriving for dinner in shorts and t-shirts though ... but stay tuned!

Located on the North Coast Road at Apple Bay. If coming from the south west part of Tortola, take Zion Hill Road to the north shore, turn right. Go past Bomba's Shack, through Capoons Bay and follow the road about a mile. The Sugar Mill entrance is on your right, opposite the little beach and Islands Restaurant.

If coming from the Cane Garden Bay side, follow the same coast road west, go through Carrot Bay and over the hill. At the bottom of the hill is the Sugar Mill entrance on your left with the little beach on your right.