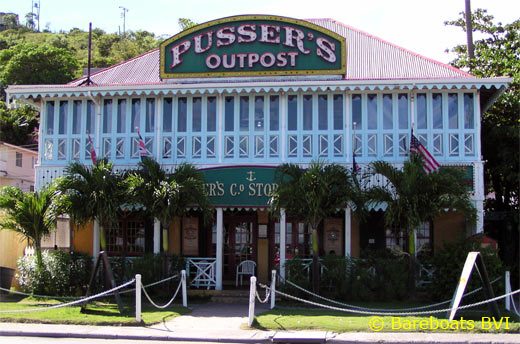 
Charles Tobias opened the original Pusser's store on Main Street in Road Town, early in 1979. He opened the shop intending to sell his sailing shorts and madras shirts that he had designed for himself because he found the clothing available wasn't really suitable for warm weather sailing.

People began asking where he got his clothes and fabrics and he soon realized that there may be a market for them, so he decided to manufacture them for sale. The tiny store was just 400 square feet and within that footprint, he managed to cram in 4 chairs and a small table.

Since about 1655 the ship's purser (which somehow became distorted to pusser) aboard all British Royal Navy ships supplied each sailor his daily "tot of rum", commonly referred to as "the pusser's rum" or grog.

Charles Tobias had sampled the Royal Navy rum as he was sailing the Caribbean and fell in love with it. Always looking for a new business opportunity and after much negotiating, Charles was able to purchase the rights to and the blending recipe for Pusser's Rum from the Admiralty in 1979. His first bottle was produced in 1980.

Tobias began giving out free samples of his hard won prize to folks visiting his little shop and the rum proved as popular as his clothing. That was the beginning of a small empire that is still flourishing more than 35 years later.

The restaurant is decorated with authentic stained glass chandeliers typical of the Victorian era, life rafts, life rings, pictures of sailboats and other nautical paraphernalia.

Pusser's is well know for their tasty pub fare, pizzas and of course their signature drink, the Pusser's Painkiller. I am partial to their Reuben sandwich and rarely order anything else. It's very good.

These days the store sells an entire line of men's, ladies and children's casual clothing, including belts, hats, t-shits and sailing jackets. They also sell spices, cigars, decanters, giftware and a host of other products.

The restaurant is located on Waterfront Drive just west of Crafts Alive and a hop skip and a jump away from the Road Town Ferry Terminal.