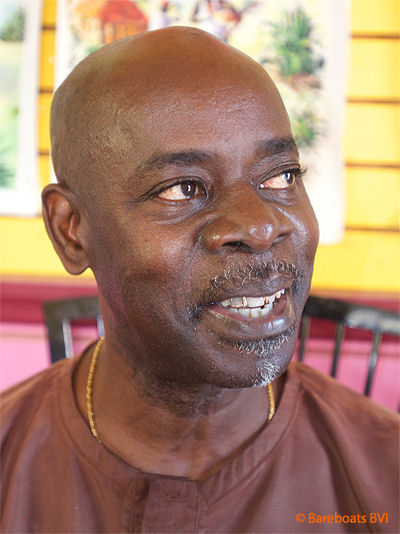 Joseph Hodge
Upon first meeting Joseph Hodge, I felt as though I were visiting an old friend. His warmth, humility and quiet spoken nature, are as truthful and as genuine as his art. Like many artists, Joseph was born to paint and began showing his artistic flare very early on in life.

His parents were divorced when he was very young, and as a result, he didn't know his father until he was 12 or 13 years of age. That's when he discovered that his father was also an artist. "It's in the genes", he said with a modest grin.

Beneath that humble and quiet exterior lies a restless heart. Though many of his paintings hearken back to a simpler life and his childhood days on Tortola, Joseph has gone through a transition which is reflected in his work.

Well known throughout the Caribbean and beyond, the majority of Joseph's earlier paintings were dedicated to the "naive" or "primitive" style. His works were not unlike the type of paintings produced by Gramdma Moses ... but with a distinctly Caribbean flavour.

His strokes were bold and so were the colours. However, I always felt there was something missing in his earlier works. His paintings ... though always compelling, seemed a little flat to me. They were missing that certain "something" I couldn't quite put my finger on.

I am by no means an art connoisseur, nor do I know the first thing about art. I only know what I like ... not why I like it. So take my opinion in the spirit in which it is offered ... and add about 10 pounds of salt!
One of Oscar Wilde's more famous quotes began ... "With age comes wisdom", ... and in my opinion, I believe Joseph has found his wisdom as well as the missing element! I finally discovered it as well when I visited his studio at Crafts Alive.

Joseph Hodge Painting
Lately, his naive style has been combined with a smattering of impressionism, injecting somewhat of a Monet "esque" quality to his paintings. With this newer style, he has injected a greater use of light and shadows. That was it! It was light and shadows I had been missing in his earlier pieces!

This new style is a particularly interesting form of the primitive genre, which I find absolutely captivating and entirely unique.

Recently, politics and cultural influences impacting the BVI have spurred him to delve into yet another side of his artistic soul, which has developed into a more surrealistic quality in his paintings. It seems there is no end to this man's talents!

Joseph paints using both palette knife and brush and what appears to be a paper plate upon which he skillfully mixes his acrylic paints, that include every colour under the sun. His understanding of and use of colour is remarkable.

Not surprisingly, visitors to the British Virgin Islands will often find Mr. Hodge's work hung in their hotel rooms and many pieces of his art also grace the walls of various businesses throughout the territory. You will also find his paintings in government buildings and along the roadside in a couple of well known places.

Joseph is one of the founding members of the BVI Art Foundation and is also an art teacher. He encourages his students to dig deep within and to incorporate their intuitive knowledge of the people of the BVI, their culture and their history ... and to infuse that knowledge into their art.

When you first walk into his tiny studio at Craft's Alive in Road Town, it is difficult to appreciate just how talented he really is. It is a working studio rather than a gallery.

None of his paintings are framed or properly lit. Rather, they are unceremoniously stapled to the wall or held in place by large paper clips, side by side ... making it difficult to appreciate each one individually. But take any one of them outside, into the light and imagine it framed ... and you will see just how irresistible his work really is.
His prices are ridiculously low, so I urge anyone interested in investing in some original Caribbean art, to take the time to visit his studio. Just ask anyone at Craft's Alive where you can find him or better yet, give him a call! 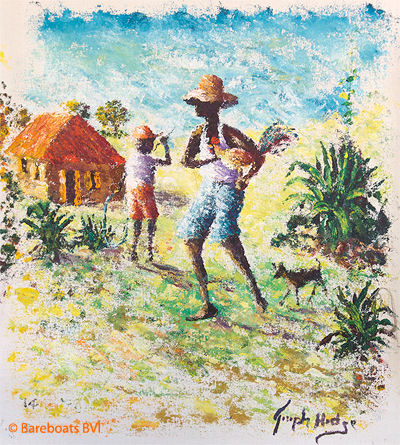 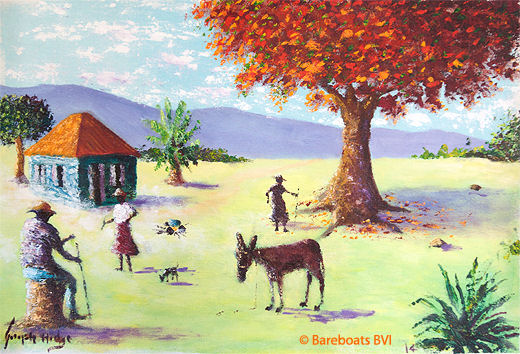