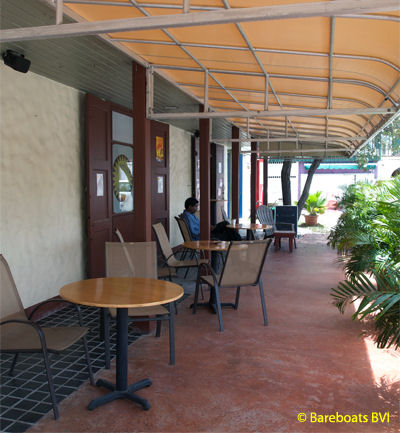 
Phillip Fenty (as luck would have it) was my first contact on Tortola many moons ago. Phillip is a registered CPA, a true gem of a man and a successful entrepreneur.

Several years back, he decided it was high time the island had a proper café, offering all the various coffees available around the world. He and his lovely wife Ann, started D' Best Cup Café in a tiny store on Main Street, which quickly became a huge success. He then opened a satellite shop in Trellis Bay on Beef Island.

Not one to sit idle for very long, Phillip sold a franchise to Omar Hurst, for his D' Best Cup Cafe and Restaurant located in Soper's Hole ... which rapidly became wildly popular as well.

Imitation being the greatest form of flattery, several other specialty coffee shops started to pop up around the British Virgin Islands. None have quite matched the popularity of D' Best Cup ... but they try.

Managing both shops located so far apart became too much of a hassle for the semi-retired accountant, so he closed the Trellis Bay location to concentrate on his Road Town store.

The new café is lovely. Not only did he expand their floor space to include several indoor and outdoor tables, but their menu has expanded as well. Aside from great coffee, tea and pastries, you'll find wonderful sandwiches, wraps, marvelous wings and a host of new things to try. They even have wine tastings and live entertainment at times. Call to find out what's happening. Their cappuccino is wonderful!