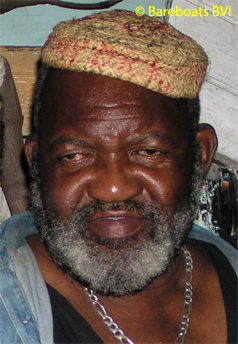 
Bomba (the full moon party king) is one of the most enigmatic people I know! From all appearances, Bomba's Shack is strictly, adult entertainment! Ladies panties and bras dangle from the roof and signs offer "free T-shirts if you get naked for Bomba".

Notoriously camera shy, (except during the occasional Full Moon Party) it took the former owner of the Jolly Roger (Lou Schwartz) to get him to sit for this photo for me!

Bomba built his surfside shack on the beach in Apple Bay (aka Capoon's Bay), Tortola in 1976. Not having a lot of money for building supplies, he used driftwood, pieces of tin roofing that had been discarded, broken surf boards and anything else he was able to scrounge or happened to wash up on the beach. The end result is a distinctly eclectic, ever changing, collage of trash ... that somehow works!

Bomba's Shack quickly became a popular hangout for surfers and hosts various surfing competitions. In 1989, he decided to hold full moon parties, a tradition which continues today. Much like an island style tailgate party, the full moon party takes place on the road between Bomba's two buildings and provides an excellent opportunity for people watching, limin', dancing and generally having a great time!

Despite the Hoopla about Bomba's mushroom tea, (though I have never tried it myself) ... it is reportedly more myth than reality and is quite safe. Don't hold me to that though. As I said, I've never tried it and I likely never will!

Aside from being one of the more popular places for surfing on Tortola, Bomba's Shack is known for their monthly full moon parties. Unlike other venues, Bomba's parties always fall on the actual full moon, so there should be no confusion regarding the dates. Every other night is just a regular party!

During the day, visitors will enjoy the wonderful sea breeze, great views of Jost Van Dyke, the Tortola shoreline and watching the surfers doing their thing.

For those who have family or friends out surfing, there's no shortage of interesting things to read while you enjoy a nice cold drink from the bar.

The "decorations" include Graffiti contributed by visitors and of course, the above mentioned panties and bras in various stages of disintegration, that substitute for the burgees and license plates found in most bars throughout the British Virgin Islands.

Definition of Bomba: An Afro-Puerto Rican music and dance form dating back to the 17th century.

On the North Coast Road just east of the Zion Hill intersection. Just look for a "shack" and that's it!

Sometimes during high season and always on Full Moon nights.