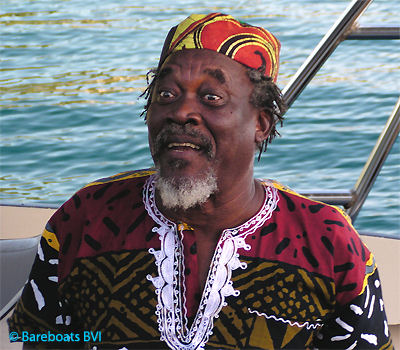 What can be said about Philicianno Callwood?

I find myself smiling just thinking about this irrepressible man! Who else would have a life sized, mannequin, known as the "epoxy Foxy" made as a stand in for himself so guests won't feel slighted on his days off?

While writing about "the silver Fox" and his restaurant and bar on Jost Van Dyke, adjectives describing him came flooding into my head. During this process, the article evolved into a "foxy-esque" poem in tribute to the man who never fails to make people smile!


This barefooted man with the saucer eyes
just loves to sing, while cracking wise.
With his big bowl chest and engaging grin,
Foxys' never afraid to go out on a limb.

He sings about things which are normally "taboo",
and he'll smile that smile while insulting you!
But don't get upset, its all in good fun
Just relax and pound back a little more rum!

In no time at all, you'll feel right at home
'cause when Foxy sings, he gets in the zone.
He's quick with a joke and thinks on his feet
a more lovable rogue you'll never meet!

And when he sees you've turned red from the sun,
Look out now, 'cause here it comes!
He's certain to note you'll turn green when sick
or blue when sad ... its part of his schtick!

And when he's done exhausting all shades,
He'll wait a moment while the music fades ...
You could never accuse him of being a dullard
When he abruptly cries, "And you call ME coloured!"

He's the troubadour of Jost Van Dyke
That irrepressible man with guitar and mike.
He's got a big bowl chest, and engaging grin,
with the heart of a poet who can rhyme at whim!

He's a world famous guy - renowned for his quips
and when he's at work ... he never quits!
He loves a crowd and he's always "on"
But he's hired a stand in for when he's gone!

The "epoxy" Foxy will just have to do
... 'cause the poor guy needs some time off too!
He's no spring chicken and needs his rest
He's gotta sleep to be at his best!

Yes, he's the troubadour from Jost Van Dyke
he's lived on the island nearly all his life
He's cocky and funny, that's nothing new
but I'm sure he'd add ... good looking too! 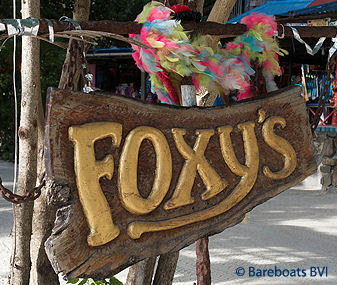