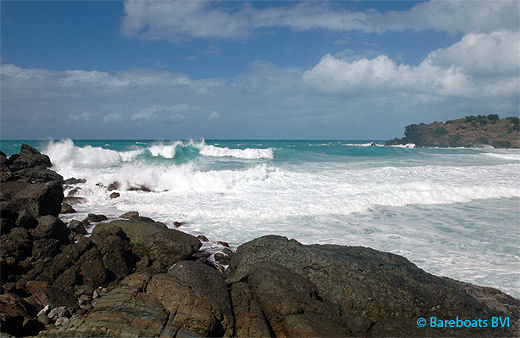 Strong wave action in the cut between Cape Wright and Dimmie Don Point
It may be a bit over the top to advise grown people when not to do something, so please accept my apologies in advance if this comes across as a bit much. Here's the thing ...

The first indication that it may not be wise to go in the bubbly pool is if you see strong wave action in the cut between Cape Wright, Jost Van Dyke and Dimmie Don Point on Little Jost Van Dyke ... such as can be seen in the principal photo.

For lack of a better description, I have dubbed the bubbly pool a "rip pool" because it is an inland pool, separated from the sea by several large boulders jammed into a narrow "V" shaped channel.
Below are two photos of the channel on very calm days. The first is an aerial photo taken from the sea side and the next is taken from land on the pool side.

This seemingly innocuous formation naturally produces a large and at times, dangerous rip current. On a day when the channel looks like this, you will likely be disappointed as no waves will be entering the bubbly pool at all. 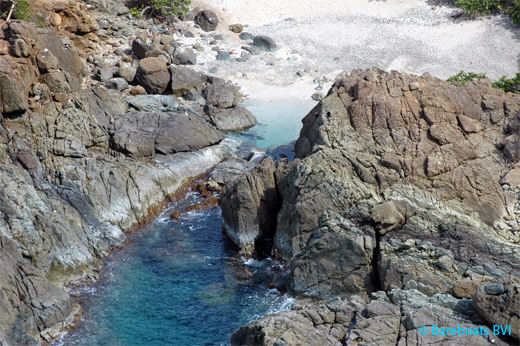 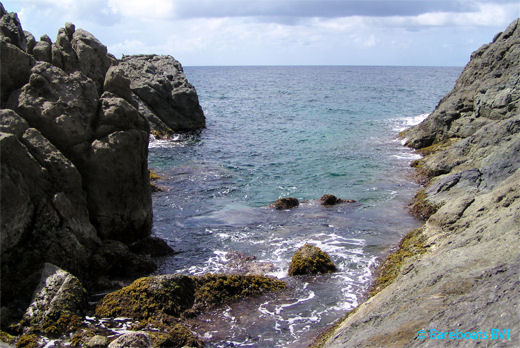 
In the picture above (Bubbly Pool Cut), note the above water rocks covered with growth in the foreground. That growth would not be present if it weren't covered in water more often than not.

Conversely, when the swells are up, they can often be dangerously so. Such is the case in the next three photos below. 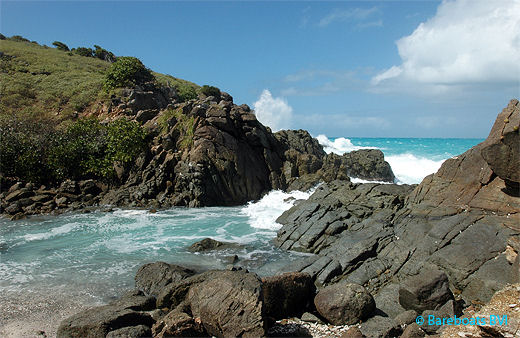 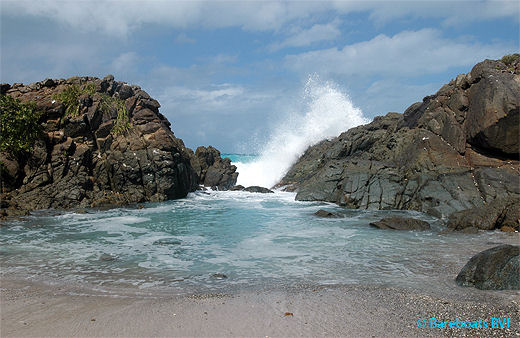 
It may not appear dangerous, but note that the pool is full of sea foam. Waves are crashing over the 20' high rocks and a large wave is entering the pool. Remember that foam.

See the new wave coming into the pool in the photo above? See the foam still in the pool? Foam in the pool that does not completely dissipate between waves is a warning sign. In fact, it is the most obvious sign that a very strong rip current may be present. This is one of those times when it is not safe to go in the pool, despite how tempting it may seem.

Seconds after I took the picture above, I snapped the one below. Note the volume of water rushing into the pool which nearly obliterates the 10' high, nobly rock near the middle of the photo. That is a lot of water ... and it all has to flow back out, creating the perfect rip current in the process. 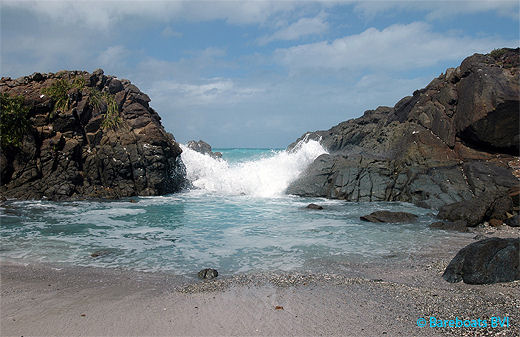 Note the volume of water rushing into the Bubbly Pool


The three photos above demonstrate when you should not go in the water. Compare them to these photos of the bubbly pool on an idyllic day. Note the wave heights and the lack of foam in the pool between waves.

Also compare the water levels in the pool on a calm day when there is zero wave action. The boulders jamming the channel entrance are all visible and most are completely dry. That's because water seeks it's own level. On a calm day, when no waves are entering the pool, the water in the pool is barely knee high at the deepest point.

It's not a good idea to sit, stand or climb on the rocks immediately surrounding the bubbly pool, unless it is a calm day. Despite the temptation to get photos or to see what there is to see, waves can surprise you and wash you off the rocks if you are focused on the pool and not paying attention to incoming waves.

Sailors understand that a rogue wave can appear out of nowhere and at any time. The force that accompanies such a wave is not something to be taken lightly. If you insist upon getting "that shot", be sure to take someone else with you who can keep an eye on the waves and alert you if necessary.

It goes without saying that children should not be left alone here at any time as even small waves can easily overpower them in this particular setting. There's no lifeguard on duty, but there is a lifebuoy and line should the need arise.

All of this is to say, please employ common sense and stay safe.