Shell collecting in the BVI 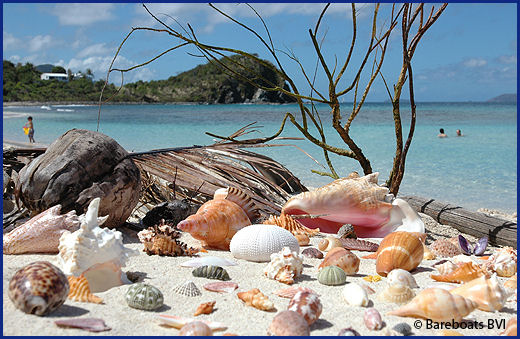 You are not likely to find most of these shells at the beach!

If searching for particular types of shells in the BVI, you first need to know the animal's natural habitat. Sure, you can often collect all sorts of shells at the beach, particularly after a storm ... but the chances of most shells being in really good condition is hit and miss. That's because the animal may have died several miles offshore. Time, tide and wave action eventually spit the shell up onto a beach. By that time, it has been rolled around in the sand so much and hit any number of hard obstacles, that it sustains damage to delicate spines, edges and exterior finish.

Though I am an avid shell collector, I abhor the practice of taking any live specimens from the sea. This is illegal in the BVI and should be illegal everywhere. There are plenty of shells to be found, without having to kill anything. I believe in letting nature take its course!


Without giving away my favourite shelling haunts and most likely places to find good shells in the British Virgin Islands ... I will say this:

A selection of seashells found (mostly) on Tortola
Storms are a sea creature's worst enemy. The poor little things become overpowered by swells and storm surges and simply cannot hang on to whatever it was using to anchor itself. Once dislodged from its anchor, the creature is powerless to save itself. After all, most creatures with exoskeletons don't swim! It will be swept up by a large wave or bottom swell and violently pitched out of the water, landing on shore not too far away from its natural habitat. If that habitat has a rocky shoreline, the chances of the shell being wedged into an area where it cannot escape back to the sea are pretty good. Of all the shells I have found over the years, the best ones have been wedged between rocks.

Since the animals which inhabit most seashells are generally found near reefs, attached to rocks at or above the water line and in sea grass beds, it makes sense that the exoskeletons of these creatures will be found on the closest shore where mother nature so unkindly tossed them.

So if hunting for that illusive shell you have always wanted for your collection ... read up on the creature and find out what it feeds on, how deep it likes to be and where it is most likely to be found in the British Virgin Islands. Snorkeling or scuba diving to find these locations will give you a good head start. From there, let mother nature take its course. If there is a rocky coastline nearby that corresponds to the prevailing wave action, wait for the next storm, let a day or two pass and head out with your shelling bag!

Of course ... sometimes you get lucky at the beach too!