Hurricanes can and do threaten the Caribbean and the British Virgin Islands from time to time. Hurricane season officially begins June 1st and ends November 30th. However, the vast majority of storms that have affected the BVI in the recent past have occurred in September ... with a couple of notable exceptions.

There have been many more storms than those listed below which have threatened the British Virgin Islands, the most recent of which was hurricane Gonzalo, which passed to the north of us on October 13, 2014. It appeared as though it was heading straight for us but made an abrupt right turn at the last minute, proving to be no more than a major headache for those who live here as well as visitors. The good news is that my garden got some much needed rain!

When it comes to hurricanes, we've been luckier than others but we've not been left unscathed.

Hugo (in 1989) was certainly the most devastating storm to hit the BVI, with the one-two punch of Luis and Marilyn following closely behind. Bertha spawned some horrific tornados in her wake, Georges ruined my birthday in 1998 ... and Lenny (a category 4 hurricane) came out of the blue from the wrong direction, narrowly missing us. Earl did some damage ... but nothing terribly serious.


What are the chances of a Hurricane ruining our sailing vacation?

My math skills are rather poor, so figuring out probabilities isn't my strong suit. But, if we take the 25 year period from 1989 to 2014, the BVI experienced 8 major storms in total. Of those, 6 were direct hits and 2 were very near misses with high winds and some serious rainfall recorded.

Of the 8 storms, 6 of them showed up in the BVI between August 30th and September 21st. One reared it's ugly head on July 8 and the other one surprised us on November 17th and 18th.

So in actual fact, the chances of your holiday being affected are pretty slim as most of the yachts we represent are hauled out of the water from late August until the end of September for annual maintenance. That leaves just 2 storms in the past 25 years that had any serious affect on charter guests.

Of course, my logic is based on historical data and mother nature doesn't give a hoot about history. So although the probabilities are very slim that your sailing holiday would be affected by a hurricane in June, July, most of August, October or November ... the possibility still exists.

The long and the short of it is ... if you want to take advantage of low season rates and special offers, such as 10 nights for the price of 7, then you have to hedge your bets and take your chances. Otherwise, you should charter in high season and hope it doesn't rain.

What happens if we are in the British Virgin Islands when a hurricane approaches?

It is incumbent upon all bareboaters to monitor the weather channel daily. We usually have at least 5 days notice of an approaching storm and each of the charter companies monitor the progress of tropical storms and hurricanes very closely. Of course, there are exceptions to every rule. Hurricane Gonzalo snuck up on us in October, 2014 with only about 24 hours notice.

If management staff feel that the storm is not too severe, you may be allowed to stay aboard your yacht at the dock (at the charter base) for the duration of the storm. However, if it appears the storm is likely to be substantial, you may be evacuated from the yacht for your own safety.

The office staff will assist in relocating you to a nearby hotel at your expense so that you may resume your charter once the storm passes.

Provided yachts are not taken to the hurricane hole and are kept at the various charter bases throughout the storm, it is likely that you will be able to resume your vacation, once the storm passes.

Whether or not you will be advised to go home (provided flights are available), will depend upon the severity of the storm. In many cases, a category 1 hurricane, which is on the low end of the scale will produce some damage, but is generally not devastating. Chances are you may be able to get back out on the water within a day or two, allowing you to salvage what you can of your holiday.

A category 2 hurricane may be a little trickier, but you may still be able to get back out on the water relatively quickly.

Category 3 is pushing things and you may not want to be here ... but it may not be too bad in many parts of the BVI. Again, it depends on the size of the storm and where it actually hits the hardest. I spent 9 miserable days without power after hurricane Georges, a category 3 storm, passed through in 1998, but most roads and shops were open within 3 to 4 days and a lot of boats were back out on the water within 2 to 3 days.

If there were to be a category 4 to 5 hurricane approaching, I would rather be anywhere but here. There will be very obvious damage, some devastation and perhaps even loss of life. In any case, it won't be pretty. It can take a lot longer after a stronger storm blows through for roads to be cleared, power to be restored, shops to open, etc. It's just not pleasant. If you can get out, I highly recommend you do so.

Will we be compensated if our sailing vacation is interrupted by weather?

Charter companies cannot be held responsible for acts of God. That's what travel insurance is for! If travelling anywhere in the Caribbean during hurricane season, it is always a wise choice to buy trip cancellation and trip interruption insurance. Your flights, the cost of the yacht, etc. will all be covered.

Having said that, as a friendly gesture, some companies may offer free days towards your next sailing vacation, though they certainly are not required to do so. None will offer refunds.

What if we are just about to leave for our BVI holiday and a storm approaches?

You should always check the weather forecast for the BVI prior to leaving on vacation, particularly in hurricane season. My daily "weather at a glance" is Intellicast's Atlantic Satellite. When I want to see a bigger picture, I take a look at their Caribbean satellite and click on the animation button. Both give a pretty clear picture of what is happening ... provided you know what you are looking at.

There are numerous weather info resources on the internet, but you should call or email your yacht charter broker or charter company to get the latest updates as to what the current plans are ... and take it from there.

On August 31st, 2004, it became apparent that for the BVI at least, Hurricane Frances (a category 4 storm) would be a non-event. I took a drive along the north shore of Tortola to see what I could see.

I arrived at Bomba's Shack at 2:30 in the afternoon to find surfers enjoying the effects of the storm. An hour later, you wouldn't have known it was only 3:30 pm. It looked like nightfall!

I was trying to get a photo of a very ominous cloud passing over Jost Van Dyke. I lined up the shot and just as I clicked the shutter, "something" came thundering behind me and shot overhead!

In the blink of an eye, it was at once very dark and then very light. An astonished fellow standing nearby asked, "What was that?" I said I thought it might be lightning, but for all I knew, it could have been a Pterodactyl ... I had been looking through the lens!

Several seconds later, my suspicions were confirmed by a very, very loud thunder clap. The net result was the surreal scene in the first photo below! The second picture below was taken a couple of minutes later and is a much more accurate depiction of the actual light conditions. Freaky! 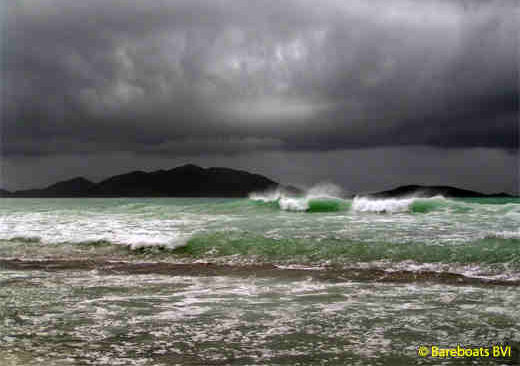 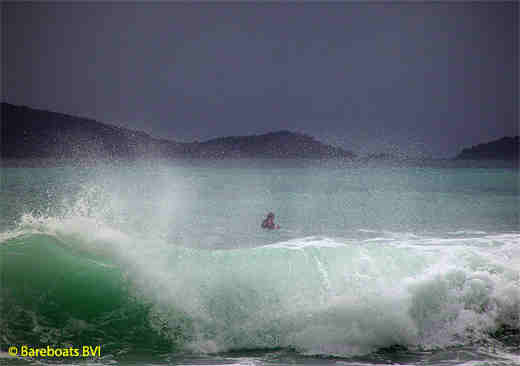